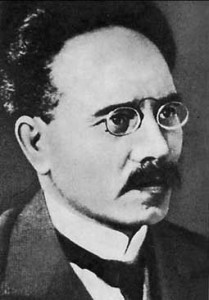 Karl Liebknecht (1871-1919) was a German writer, politician and socialist revolutionary. He was a noted anti-war critic and campaigned against German militarism before the war.

Liebknecht came from a politically active middle-class family in Leipzig. After studying law and serving briefly in the military, Liebknecht set up a private practice in Berlin, where he represented socialists charged with political offences.

Liebknecht joined the Social Democratic Party (SDP) and became an influential member of the party’s left-wing.

In 1907, he published Militarism and Anti-Militarism, which argued that militarism was a cynical device of the elites, used to control the working classes and “arm the people against themselves”. The publication of this book led to Liebknecht being arrested and imprisoned for 18 months.

In 1912, Liebknecht was elected to the national Reichstag. He continued his vocal opposition to the arms build-up and, from August 1914, spending on the war effort.

Liebknecht’s opposition to the war triggered a split in the SDP and led to his arrest and forced military service on the Eastern Front. He returned to Germany in late 1915 and continued to organise anti-war protests, prompting the German government to imprison him for the duration of the war.

Liebknecht was released in the last days of the war and went on to lead the ill-fated German Revolution of January 1919. He was captured by government troops, tortured and shot in the back.

Title: “Karl Liebknecht (Germany)”
Authors: Jennifer Llewellyn, Steve Thompson
Publisher: Alpha History
URL: https://alphahistory.com/worldwar1/karl-liebknecht-germany/
Date published: July 28, 2017
Date accessed: June 30, 2022
Copyright: The content on this page may not be republished without our express permission. For more information on usage, please refer to our Terms of Use.