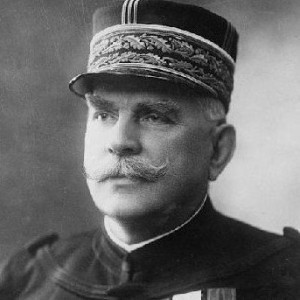 General Joseph Joffre (1852-1931) was a French military officer and the commander-in-chief of France’s military for the first half of the war.

Joffre was the son of a wine-growing family who left the vineyards to become a career military officer. He served in the Franco-Prussian War in the early 1870s then spent many years in colonial postings.

In 1911, Joffre was given command of the French army, despite having a background in engineering. Joffre initiated a review of French military strategy and introduced Plan XVII (1913), which was largely concerned with the recapture of Alsace and Lorraine.

Plan XVII also placed a low priority on defending the French-Belgian border, since Joffre and his fellow commanders believed – wrongly as it turned out – that the Germans would not risk bringing the British into any war by invading Belgium.

While Plan XVII was quickly revealed to be flawed, Joffre’s leadership was enhanced by his response to the Schlieffen Plan. It was largely because of Joffre’s tactical command that French forces were able to halt the German advance at the Battle of the Marne in September 1914.

Joffre’s reputation took a battering in 1915-16, however, after a series of costly and unsuccessful offensives against German-held lines.

In early 1916, as Joffre and Sir Douglas Haig began planning a joint Anglo-French offensive, the Germans attacked French positions at Verdun. French generals were unable to formulate an effective response to the German assault at Verdun.

With the French army at risk of annihilation, Joffre began to show signs of strain. In December 1916, he was replaced as commander-in-chief by Robert Nivelle, who spoke fluent English and was, therefore, better equipped to work with British commanders.

Title: “Joseph Joffre (France)”
Authors: Jennifer Llewellyn, Steve Thompson
Publisher: Alpha History
URL: https://alphahistory.com/worldwar1/joseph
Date published: July 30, 2017
Date accessed: July 06, 2022
Copyright: The content on this page may not be republished without our express permission. For more information on usage, please refer to our Terms of Use.