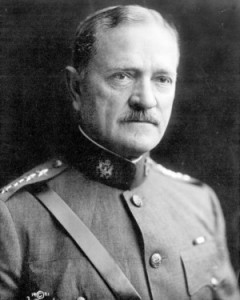 General John Pershing (1860-1948) was an American military officer and probably the best known American general of World War I.

Born to a farming family in Missouri, Pershing worked as a teacher before accepting a position at the prestigious West Point military academy. His superiors there were impressed with Pershing’s leadership skills, particularly his decisiveness and firmness with other cadets.

After graduating from West Point, Pershing received a lieutenant’s commission and saw combat in several campaigns against Native Americans, in the Spanish-American War (1898) and in the Philippines. He also rose through the ranks, becoming a brigadier general in 1905.

In early 1917, US president Woodrow Wilson appointed Pershing as commander of the American Expeditionary Force to Europe, promoting him to full general.

Pershing arrived on the Western Front in mid-1917 and began planning the deployment of American forces. Their first significant use was at the Battle of Hamel, where Americans served under British and Australian officers, the first time US troops had been given to foreign command.

By the spring of 1918, Pershing, who now had several US divisions at his disposal, reclaimed command of all American troops in Europe. He led several American divisions at the second Battle of the Marne (July-August 1918) and also at Meuse-Argonne (September 1918).

The Marne produced an Allied victory, however, the Argonne offensive was disastrous for Pershing, who repeated many of the same mistakes made by Allied generals in 1915 and 1916.

Pershing also insisted that American soldiers continue fighting after the signing of the November 11th armistice, an order that resulted in more than 200 deaths and 3,000 serious injuries.

Back in America, Pershing was hailed as a war hero and promoted to General of the Armies, a de facto six-star generalship. Historians, however, have been more divided over Pershing’s role, both as a military leader and his contribution to the outcomes of World War I.

Title: “John Pershing (US)”
Authors: Jennifer Llewellyn, Steve Thompson
Publisher: Alpha History
URL: https://alphahistory.com/worldwar1/john-pershing-us/
Date published: July 21, 2017
Date accessed: July 06, 2022
Copyright: The content on this page may not be republished without our express permission. For more information on usage, please refer to our Terms of Use.