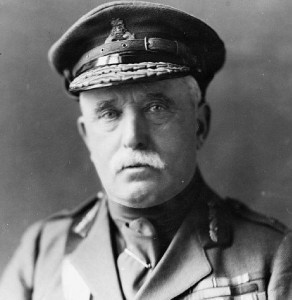 Field Marshal Sir John French (1852-1925) was the commander-in-chief of British forces in continental Europe for the first half of World War I.

Born into a military family, French enlisted in the Royal Navy but an abject fear of heights forced his transfer into the army.

French received an officer’s commission in the Irish Hussars and participated in colonial campaigns in Africa.

French also served as a major-general in the Second Boer War in South Africa, where he was commended for his decisive but calm leadership. He was later promoted to full general, then to field marshal, and contributed to British military reforms and organisation prior to the outbreak of World War I.

In 1914, French was appointed the commander of the British Expeditionary Force in northern France. He proved unsuited to this mission. Thinking the war would be over within months, on arriving in Europe he became despondent and pessimistic about the chances of victory.

Sir John had little confidence in either French generals or their men and was reluctant to commit British forces to French-planned operations. His inability to work with French commanders led to criticisms at home and Sir John’s resignation and replacement with Douglas Haig in December 1915.

Recalled to England, French was given the less important task of organising home defence. Apart from providing occasional advice to the government, he played no further part in the war on the Western Front.

French’s tarnished reputation was only recovered by the higher losses suffered by Haig and other generals after his removal.

Title: “John French (Britain)”
Authors: Jennifer Llewellyn, Steve Thompson
Publisher: Alpha History
URL: https://alphahistory.com/worldwar1/john-french-britain/
Date published: July 18, 2017
Date accessed: July 06, 2022
Copyright: The content on this page may not be republished without our express permission. For more information on usage, please refer to our Terms of Use.