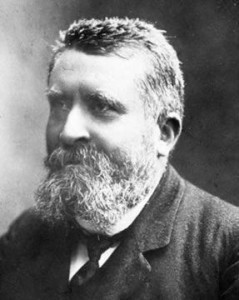 Jean Jaurès (1859-1914) was a French socialist writer and political leader who was assassinated on the eve of World War I.

Born to a middle-class family in southern France, Jaurès studied philosophy, spent some time in academia then entered local politics in Toulouse.

At first a moderate liberal, Jaurès’ political views were radicalised by his work with striking miners. He entered national politics as a socialist in 1895.

In 1902, Jaurès became a founding member and inaugural leader of the French Socialist Party, formed from a coalition of left-wing political groups. Though he never held any significant office, Jaurès was a respected and visible politician, known for his measured intelligence and polished oratory.

Well aware that a European war was imminent, Jaurès campaigned against militarism and the arms build-up, opposed the extension of French military service and called for reconciliation and understanding between Paris and Berlin.

In 1914, Jaurès attempted to short circuit the coming war by inciting general strikes in both France and Germany, a move that failed.

On July 31st, four days before the declaration of war, Jaurès was gunned down in a Paris cafe. His assassin was a young student who wanted war and considered Jaurès to be an agent for peace.

Title: “Jean Jaures (France)”
Authors: Jennifer Llewellyn, Steve Thompson
Publisher: Alpha History
URL: https://alphahistory.com/worldwar1/jean-jaures-france/
Date published: July 25, 2017
Date accessed: July 07, 2022
Copyright: The content on this page may not be republished without our express permission. For more information on usage, please refer to our Terms of Use.