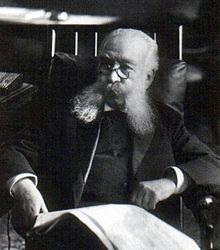 Ivan Goremykin (1839-1917) was chairman of the Council of Ministers (prime minister) of Russia from February 1914 until his retirement in February 1916.

Like most pre-war Russian politicians, Goremykin came from a wealthy and influential landowning family. He entered the Russian bureaucracy in his early 20s and proved an effective administrator, rising through the ranks.

In 1895, Goremykin was appointed as minister of the interior, holding this office for four years until his retirement. He was twice plucked from retirement, serving briefly as prime minister in 1905, then returning to this role in January 1914.

Unlike the prime ministers and heads of governments of other nations, Goremykin had almost no impact on the conduct of the war, which was overseen by the tsar and his generals.

A conservative who demonstrated absolute loyalty to the monarch, Goremykin accepted Nicholas II’s decisions and dismissed any criticism or calls for democratic reform. When Nicholas decided to take personal control of the army in September 1915, it was widely opposed by his ministers – except Goremykin, who supported it without question.

By the end of 1915, Goremykin was in his 77th year and showing signs of dementia. He petitioned the tsar for retirement and was replaced as prime minister in February 1916. The following year, Goremykin was beaten to death by a street mob during the Russian Revolution.

Title: “Ivan Goremykin (Russia)”
Authors: Jennifer Llewellyn, Steve Thompson
Publisher: Alpha History
URL: https://alphahistory.com/worldwar1/ivan-goremykin/
Date published: July 12, 2017
Date accessed: July 07, 2022
Copyright: The content on this page may not be republished without our express permission. For more information on usage, please refer to our Terms of Use.