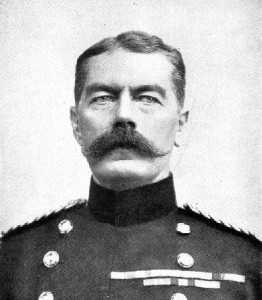 Herbert Kitchener, better known as Lord Kitchener (1850-1916) was a British general who served as minister for war until his death in June 1916.

Born in Ireland, as a teenager Herbert Kitchener followed his father into military service and saw action with the French during the Franco-Prussian War.

From the early 1880s, Kitchener served almost three decades as a military commander and consul in the colonies, most notably in India, Egypt, Sudan and South Africa. He was second in command during the Boer War and helped engineer a victory for Britain, albeit at a heavy cost.

When World War I broke out in 1914, Kitchener, by now a field marshal, was appointed Secretary of State for War.

Unlike most of his contemporaries, Kitchener expressed pessimistic but tellingly accurate views about the coming war. Rather than suggesting it would be ‘over by Christmas’, as some claimed, Kitchener believed it would run for years and cost millions of human lives.

Kitchener also became the public face of the British war effort, appearing on a famous series of propaganda posters that indignantly insisted that British men volunteer for service.

Identifying the immovable nature of the Western Front, Kitchener supported strategic attacks on German allies, beginning with an invasion of the Ottoman Empire. This led to Kitchener’s association with the disastrous Gallipoli campaign, which brought him some discredit.

Kitchener was also subject to criticism during the Shell Crisis of mid-1915, with claims he had failed to identify the need for increased munitions production.

In June 1916, Kitchener was killed while travelling to Russia when the Royal Navy vessel he was aboard struck a mine during a heavy storm off the Scottish coast. He was the highest ranked British military or political figure killed during World War I.

Title: “Herbert Kitchener (Britain)”
Authors: Jennifer Llewellyn, Steve Thompson
Publisher: Alpha History
URL: https://alphahistory.com/worldwar1/herbert-kitchener-britain/
Date published: July 13, 2017
Date accessed: September 17, 2021
Copyright: The content on this page may not be republished without our express permission. For more information on usage, please refer to our Terms of Use.