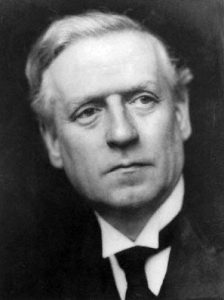 Herbert Henry Asquith (1852-1928) was British prime minister for the first half of World War I, governing from April 1908 until his resignation in December 1916.

Born in Yorkshire and educated there and in London, Asquith won a scholarship to Oxford, studied classics and law and became a successful junior barrister.

In 1886, Asquith stood for and won the parliamentary seat of East Fife. He would remain in parliament for almost 40 years, serving as home secretary, chancellor of the exchequer and, from 1908, leader of the Liberal Party and prime minister.

Asquith’s government pushed through a number of significant social and economic reforms, most notably changes to welfare. It also funded the arms race and expansion of the navy.

When Germany invaded Belgium in 1914, Asquith led his government into war, despite his natural inclination being for peace. For the first six months of the conflict, Asquith’s popularity remained high. Falling enlistments, the lack of military progress in Europe, the failed Gallipoli campaign and the Shell Crisis of 1915 all weakened his government.

In May 1915, Asquith was forced to form a coalition government with conservatives, creating divisions in the cabinet. Asquith’s personal handling of the war effort also came in for criticism, with claims that he was affected by poor health, fatigue, heavy drinking and other distractions.

The situation worsened through 1916, leading to Asquith’s resignation in December. He was replaced by David Lloyd George.

Historians have long debated Asquith’s effectiveness as a wartime prime minister, with the majority suggesting he was too distracted and indecisive for the role.

Title: “Herbert Asquith (Britain)”
Authors: Jennifer Llewellyn, Steve Thompson
Publisher: Alpha History
URL: https://alphahistory.com/worldwar1/herbert-asquith-britain/
Date published: July 10, 2017
Date accessed: July 07, 2022
Copyright: The content on this page may not be republished without our express permission. For more information on usage, please refer to our Terms of Use.