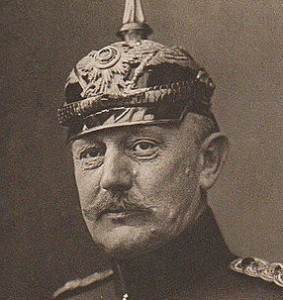 Helmuth von Moltke (1848-1916) was head of the German military between 1906 and 1914 and thus largely responsible for Germany’s war preparations.

Born into a privileged family, von Moltke was named after his prominent uncle, Helmuth von Moltke the Elder, who had served for three decades as Chief of General Staff in the newly unified Germany.

The younger von Moltke enlisted in the Prussian army as a teenager and fought in the 1870-71 war with France. He later served on the staff of his famous uncle, then as an aide to Kaiser Wilhelm II.

In 1906, von Moltke was selected to replace von Schlieffen as Chief of General Staff, probably at the Kaiser’s insistence. This appointment surprised some, as von Moltke had leapfrogged several better-equipped candidates.

His tenure as Chief of General Staff was no less controversial. Some historians assert that von Moltke condemned the Schlieffen Plan to failure by downsizing it and depriving it of men and equipment; others suggest it failed because of unforeseen operational and communications difficulties once the attack had commenced.

Discredited and in poor health, von Moltke was replaced as Chief of General Staff by Falkenhayn in October 1914. He played no significant part in the war thereafter and died in late 1916.