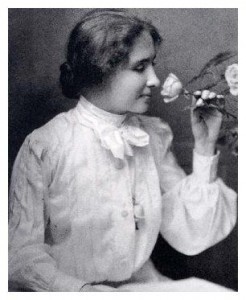 Helen Keller (1880-1968) was a campaigner for the disabled, a radical socialist and a political activist who voiced strong criticisms of the war.

Born in Alabama, Keller became ill before her second birthday, probably with scarlet fever, and was left permanently blind, deaf and mute.

Through the work of a tutor, Anne Sullivan, Keller was taught to communicate and, by adulthood, had become proficient at reading and writing. At age 20, she gained entry to Radcliffe College and became the first blind and deaf person to earn an arts degree.

Much of Keller’s life was devoted to socialist activism, philanthropy, pacifism and championing the rights of both women and disabled people. She was a member of the Socialist Party and the International Workers of the World (IWW) and a supporter of Eugene Debs.

When war erupted in 1914, Keller criticised it as a capitalist money-making venture, writing that the “workers suffer all the miseries [of war] while the rulers reap the rewards”.

In 1916, Keller advocated a general strike, writing: “Strike against war, for without you no battles can be fought. Strike against manufacturing shrapnel and gas bombs and all other tools of murder. Strike against preparedness that means death and misery to millions of human beings.”

Keller’s physical condition and public profile prevented American authorities from taking any punitive action against her, as they did against Debs and Emma Goldman.

Title: “Helen Keller (US)”
Authors: Jennifer Llewellyn, Steve Thompson
Publisher: Alpha History
URL: https://alphahistory.com/worldwar1/helen-keller-us/
Date published: July 25, 2017
Date accessed: June 23, 2022
Copyright: The content on this page may not be republished without our express permission. For more information on usage, please refer to our Terms of Use.