Britain before World War I had enjoyed almost a century of unparalleled peace and prosperity.

Despite the rapid advances of nations like United States and Germany, Great Britain remained the most technologically advanced nation on Earth. It was the crucible of the Industrial Revolution and home of the greatest inventions of the age.

The development of steam engines in the 1700s had revolutionised British manufacturing, transport, labour and society. Gigantic factories were powered with steam-powered machinery, capable of mass-producing products previously only made by hand.

After the Industrial Revolution, Britain became the manufacturing centre of Europe, importing raw materials from its colonies and trading partners and turning them into goods for sale. British shipbuilders were the busiest in the world, constructing thousands of vessels for trade and defence.

Within Britain itself, a vast network of canals allowed longboats to move cargo. In the mid-1800s, canal boats were superseded by trains and railways, another British development.

Beyond its own shores was the British Empire, a vast sprawl of territories and possessions on which ‘the sun never set’. This empire spanned 35 million square kilometres or one-quarter of the globe. Its showpiece colonies of India, Australia, Canada and South Africa were the envy of the world.

During the mid to late 1800s, Britain acquired even more territory as its colonisers and settlers employed new technologies, like railways and improved weapons. Most of the gains in this period were in Africa, where Britain acquired new colonial possessions from Egypt in the north to Rhodesia (now Zimbabwe) in the south.

Imperialists dreamed of an Africa controlled by Britons, from Cairo in the north to the southern Cape. Plans were even drawn up for a British railway running the entire north-south length of the African continent.

An empire of profit

This vast British Empire was, first and foremost, an economic concern. The colonies supplied a wealth of raw materials and products, such as gold and silver, other metals, diamonds, cotton and wool, meat and grain, timber and tea.

Britain’s domination of foreign trade was matched by its naval power. The Royal Navy was the world’s largest naval force through the 1800s.

The showpiece of British progress was the Great Exhibition of 1851. Held in the Crystal Palace, a gigantic glass building in London, the exhibition was attended by more than six million people and featured more than 13,000 exhibits.

Britain was not without its problems, both at home and abroad. Rapid industrial growth during the 1800s had lined the pockets of the middle and upper-classes – but Britain’s industrial workers toiled for long hours in difficult conditions, with very few rights or protections and no political representation.

These problems and inequalities did not go unchallenged. Writers like Charles Dickens highlighted the social ills of the age. Reformers like Henry Mayhew and Matthew Arnold urged fundamental social and economic change.

There were also demands for political reform. The British parliament was democratically elected but only those with a minimum amount of property were given voting rights. By the mid-1800s, only around one in seven British males was entitled to vote.

In 1819, a crowd of 70,000 gathered in St Peter’s Square, Manchester to demand political reform. They were charged by soldiers on horseback and more than a dozen were killed; the event became known as the Peterloo Massacre.

In the 1840s, a working-class movement called Chartism began demanding universal suffrage, the secret ballot and other reforms. The British union movement also took shape in the 1850s and sought to improve the rights of workers.

A left-wing group called the Fabian Society emerged towards the end of the 1800s. Members of this group participated in the formation of the British Labour Party in 1900.

Despite Britain’s industrial and naval strength, its politicians generally avoided war during the 1800s. The foreign policy during this century was described as one of “splendid isolation”.

Britain’s main imperial rival during the 19th century was Russia. London and St Petersburg competed for territory and influence in a number of regions, particularly China and Central Asia. In 1853, the two went to war in the Crimea, southern Russia, as London attempted to prevent the expansion of Russian naval power into the Mediterranean.

Britain emerged as victors. The Crimean War would be her only major conflict of the 19th century. Relations between England and Russia remained sour for the rest of the century, the pair reaching the brink of war several times. Only the emergence of a new rivalry eased Anglo-Russian tensions. 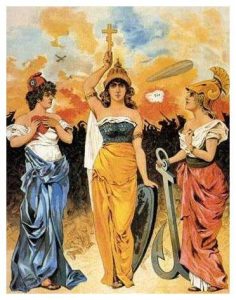 The unification of Germany in 1871 re-focused British suspicion and paranoia. British foreign policy analysts concluded that Germany, driven by its strong nationalism, might seek to dominate continental Europe. The 1888 coronation of Kaiser Wilhelm II, a hot-headed young man with imperialist ambitions, strengthened this paranoia.

The rise of Germany and its nationalist, expansionist aims coincided with internal problems in Britain’s own empire. In South Africa, Afrikaans-speaking farmers challenged British authority, leading to the Boer War (1899-1902). Britain was victorious in this conflict, though at great cost.

The turn of the century also saw the federation and independence of Britain’s Australian colonies along with growing Irish demands for home rule.

By the start of the 1900s, Britain had abandoned its policy of European neutrality and begun to play a hand in the ‘great game of alliance’ unfolding on the continent.

British diplomats forged the Entente Cordiale with France, another continental power with whom Britain was previously on hostile terms. In 1907, Britain and Russia reached a successful agreement on territorial disputes. That same year produced the Triple Entente, a three-way alliance between France, Britain and Russia.

1. Great Britain was at the centre of the world’s largest empire, a beneficiary of colonial resources and trade.

2. Britain occupied territory on four different continents and was at the centre of a vast trading and commercial empire.

5. This policy approached waned in the early 1900s, as British interest was sparked by events in Europe, particularly the unification of Germany and the expansionist policies adopted by Kaiser Wilhelm II.

Title: “Britain before World War I”
Authors: Jennifer Llewellyn, Steve Thompson
Publisher: Alpha History
URL: https://alphahistory.com/worldwar1/great-britain/
Date published: August 5, 2017
Date accessed: September 16, 2021
Copyright: The content on this page may not be republished without our express permission. For more information on usage, please refer to our Terms of Use.