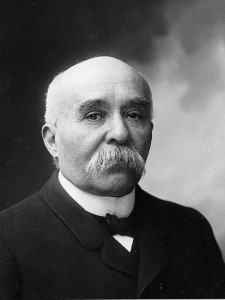 Georges Clemenceau (1841-1929) was a French journalist and political leader who served two terms as the nation’s prime minister.

Born in the Vendee, Clemenceau trained as a physician and worked in the United States during the 1860s. On his return to France, Clemenceau joined the left-wing Radical Party, entered local government in Paris and eventually took up a seat in the national legislature.

When the French government fell in 1906, Clemenceau became prime minister, a position he occupied for three years. Known for his strong speeches and barely restrained anger, Clemenceau was dubbed ‘the Tiger’ by many pundits.

The outbreak of war rejuvenated Clemenceau, who by 1914 had returned to journalism. He became a stringent critic of the government and its management of the war while refusing offers of ministerial posts.

Clemenceau became prime minister again in November 1917 and immediately set about intensifying the French war effort. His personal style and authoritarian approach did not please everyone – but many welcomed Clemenceau’s strength and determination. He made several visits to the front and worked closely with Allied commanders from all nations.

Clemenceau is perhaps best known for his actions at the Paris peace conferences in 1919, where he demanded a punitive treaty that would dismember or cripple Germany forever.

He retired from politics in 1920 and returned to writing, dying nine years later.

Title: “Georges Clemenceau (France)”
Authors: Jennifer Llewellyn, Steve Thompson
Publisher: Alpha History
URL: https://alphahistory.com/worldwar1/georges-clemenceau-france/
Date published: July 11, 2017
Date accessed: July 05, 2022
Copyright: The content on this page may not be republished without our express permission. For more information on usage, please refer to our Terms of Use.