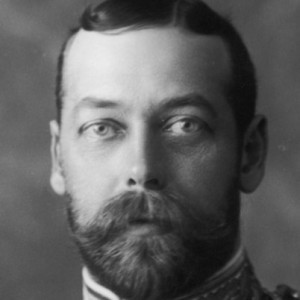 George V (1865-1936) was the king of Britain and the nations of the British Commonwealth for the entirety of World War I.

The second son of Edward VII, George was not initially destined to become king, however, this was changed by the death of his brother from influenza in 1892.

George ascended to the throne on the death of his father, Edward VII, in 1910. Though he held strong political opinions, George ruled as a constitutional monarch, leaving matters of policy to his ministers and the parliament.

The declaration of war against Germany placed the British king in an awkward position: Kaiser Wilhelm II was his first cousin and a great many of the British royal family were of German extraction or carried German names and titles.

In 1917, the king demonstrated his loyalty to Britain by changing his own dynastic name, Saxe-Coburg-Gotha, to the more English-sounding House of Windsor. Other Germanic dynastic names and titles were also abolished or renamed.

For the duration of the war, the king made no intrusive decisions of his own but took regular briefings from both civilian politicians and military commanders. He also made scores of visits, both public and private, to army training facilities, military hospitals and the like.

George V’s wartime service was thus that of a figurehead, rather than a significant decision-maker.

Title: “George V (Britain)”
Authors: Jennifer Llewellyn, Steve Thompson
Publisher: Alpha History
URL: https://alphahistory.com/worldwar1/george-v-britain/
Date published: July 7, 2017
Date accessed: July 07, 2022
Copyright: The content on this page may not be republished without our express permission. For more information on usage, please refer to our Terms of Use.