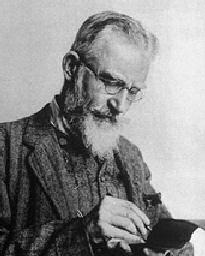 George Bernard Shaw (1856-1950) was an Irish-born British writer and playwright, arguably Britain’s greatest dramatist of the 20th century. He was also an outspoken critic of World War I.

Born in Dublin to an English Protestant family, Shaw left school at 15 and worked briefly as a clerk before moving to London.

Shaw turned his hand to writing but with opportunities scarce, he spent most of his time reading and studying in libraries. During this period, he acquired socialist political views and become a member of the Fabian Society, the forerunner to the British Labour Party.

Shaw eventually became a successful writer of novels, short stories, essays, literary criticism and, most notably, dramatic works. Shaw’s plays – such as Pygmalion, the basis for My Fair Lady – were performed across Britain and proved enormously popular.

Many of Shaw’s creations touched on important social, political or reformist issues. He was a pacifist at heart and the outbreak of World War I prompted him to speak out.

Shaw wrote several letters and articles for the press in 1914, comparing England and Germany to “a couple of extremely quarrelsome dogs”. In November, he published an essay titled Common Sense about the War that suggested English militarism was almost as much to blame for the conflict as the German variety.

This piece earned Shaw condemnation and scorn in the pro-war press, while many began to boycott his plays. Despite this, Shaw continued to write critical pieces on the war, even visiting the Western Front in 1917.

Title: “George Bernard Shaw”
Authors: Jennifer Llewellyn, Steve Thompson
Publisher: Alpha History
URL: https://alphahistory.com/worldwar1/george-bernard-shaw/
Date published: July 30, 2017
Date accessed: June 30, 2022
Copyright: The content on this page may not be republished without our express permission. For more information on usage, please refer to our Terms of Use.