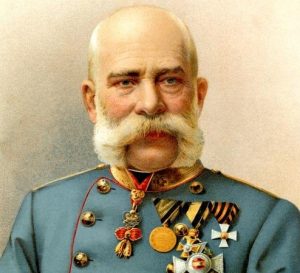 Born in Vienna, he was a scion of the Habsburg dynasty and the nephew of the reigning emperor, Ferdinand I. He received a military education and entered the army, acquiring the rank of colonel while still in his teens.

Franz Joseph became emperor shortly after his 18th birthday, following the abdication of both his uncle and his father. He spent the first decade of his reign consolidating the dual monarchy and dealing with its turbulent jigsaw of nationalist and sectarian interests.

Though his empire was often divided and his politicians corrupt or incompetent, Franz Joseph was a constitutional monarch who maintained some distance between himself and his ministers. As a consequence, he enjoyed the respect of the people, who considered him intelligent, fair and steady.

Franz Joseph’s contribution to the outbreak of World War I has been a source of some contention. The old emperor was undoubtedly a 19th century militarist: he viewed the empire’s army with pride and showed more interest in it than in any other aspect of government.

The emperor had a troubled relationship with his nephew and heir, Archduke Franz Ferdinand, who he considered too flighty and progressive to follow as emperor. Despite this, he was outraged by Ferdinand’s assassination.

Evidence suggests that while Franz Joseph supported military action against Serbia, he was hesitant about committing his army to war with Russia. But the ageing emperor followed the advice of his ministers and his generals, to whom he left the running of the war.

Franz Joseph became ill in 1916 and died late in the year, the throne passing to Charles I.

Title: “Franz Joseph I (Austria)”
Authors: Jennifer Llewellyn, Steve Thompson
Publisher: Alpha History
URL: https://alphahistory.com/worldwar1/franz-joseph-i-austria/
Date published: July 6, 2017
Date accessed: July 06, 2022
Copyright: The content on this page may not be republished without our express permission. For more information on usage, please refer to our Terms of Use.