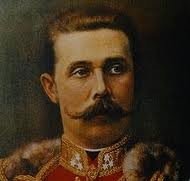 Franz Ferdinand (1863-1914) was an Austrian archduke, the nephew of Emperor Franz Joseph and the doomed heir to the Austro-Hungarian throne.

Like many young royals of his time, Ferdinand received a military education and training, before being commissioned in the Austrian army at the age of 14. His involvement with the military declined after 1889, when Ferdinand became heir to the Austrian throne, following the suicide of Prince Rudolf (Franz Joseph’s only son).

Ferdinand was an excellent candidate for a constitutional monarch: he was intelligent, realistic, well-travelled and much less conservative than his ageing uncle. He could also be stubborn, a quality made apparent by his determination to marry the commoner, Sophie Chotek.

As heir to the Austrian throne, Ferdinand took an active interest in both foreign affairs and military matters. He was on friendly terms with German ruler Wilhelm II, the two often meeting to discuss military and naval developments. This made Ferdinand unpopular with the British press, which unfairly painted him as a dangerous radical or a puppet of the Kaiser.

Franz Ferdinand’s best-known contribution to history, however, was his death. While on an official visit to the Bosnian capital Sarajevo in June 1914, Ferdinand and his wife were gunned down in their car by a teenaged Serbian student. The archduke’s murder triggered the chain reaction of threats, ultimatums and military mobilisations that soon gave rise to World War I.

Title: “Franz Ferdinand (Austria)”
Authors: Jennifer Llewellyn, Steve Thompson
Publisher: Alpha History
URL: https://alphahistory.com/worldwar1/franz-ferdinand-austria/
Date published: July 5, 2017
Date accessed: July 04, 2022
Copyright: The content on this page may not be republished without our express permission. For more information on usage, please refer to our Terms of Use.