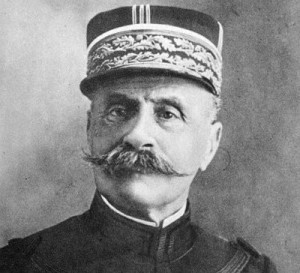 Marshal Ferdinand Foch (1851-1929) was an important French general, perhaps best known for repelling German advances in both 1914 and 1918.

Born in southern France near the Spanish border, Foch served in the Franco-Prussian War (1870-71) and remained in the army after the French defeat.

Foch completed further studies, obtained a lieutenant’s commission and began to make a name for himself as a military expert. His writings on strategy drew heavily on Prussian ideas and contributed to a transformation of French military thinking in the first years of the 1900s.

Shortly after the outbreak of the war, Foch was given command of the Ninth Army which halted the German Schlieffen advance at the first Battle of the Marne.

For much of the war, Foch worked closely with British commanders, who mostly held him in high regard. Their most notable collaboration was at the Battle of the Somme in 1916, however, the heavy casualties there resulted in Foch’s deployment away from the Western Front.

Foch returned to active service in France in 1918 when he coordinated a successful response to the German Spring Offensive.

In mid-1918, Foch was given the titles ‘Supreme Commander of Allied Forces’ and ‘Marshal of France’. In November, he oversaw armistice negotiations with the Germans.

During the Paris peace conferences, Foch urged a full Allied occupation of the German Rhineland. When this was denied he condemned the Versailles treaty as a failure, considering it an “armistice for 20 years”.

Foch was later hailed as a war hero and showered with honours and titles. Historians have been more sanguine about both his strategic approach and his effectiveness.

Title: “Ferdinand Foch (France)”
Authors: Jennifer Llewellyn, Steve Thompson
Publisher: Alpha History
URL: https://alphahistory.com/worldwar1/ferdinand-foch-france/
Date published: July 17, 2017
Date accessed: July 07, 2022
Copyright: The content on this page may not be republished without our express permission. For more information on usage, please refer to our Terms of Use.