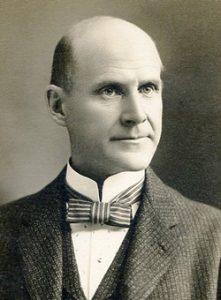 Eugene Debs (1855-1926) was an American socialist, labour organiser and political candidate who was imprisoned for inciting resistance to the war.

Born in Indiana, the teenage Debs obtained employment for the railways and became involved in trade unions. By the 1890s, he was one of the nation’s most influential labour leaders, helping form unions and playing a key role in the Pullman strike against massive wage cuts.

Debs was thrown into prison, where he embraced socialism and became a cause célèbre for American unionists. On his release, Debs founded and led both the Social Democratic Party of the United States (1896) and, in 1905, the Industrial Workers of the World, better known as the IWW or ‘Wobblies’.

Debs was a charismatic and captivating public speaker. He ran against Woodrow Wilson in the 1912 presidential election, winning almost a million votes despite not belonging to a major party.

Debs was pacifist and anti-war: he condemned the conflict in Europe as an act of exploitation of the working class. In June 1918, Debs delivered a speech in Ohio and called on American workers to resist conscription and military service.

This proved the last straw for the government, which arrested Debs under the Sedition Act and sentenced him to ten years in prison. He was released after serving a quarter of that and was later given a presidential pardon.

Title: “Eugene Debs (US)”
Authors: Jennifer Llewellyn, Steve Thompson
Publisher: Alpha History
URL: https://alphahistory.com/worldwar1/eugene-debs-us/
Date published: July 23, 2017
Date accessed: July 07, 2022
Copyright: The content on this page may not be republished without our express permission. For more information on usage, please refer to our Terms of Use.