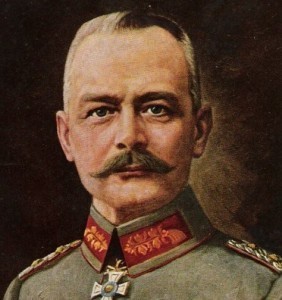 General Erich von Falkenhayn (1861-1922) was Germany’s Chief of General Staff (commander in chief of the military) for the first half of World War I.

A lifelong soldier, the Prussian-born Falkenhayn served in colonial China during the Boxer Rebellion. After this, he returned to Germany and worked as a staff officer involved in military planning and logistics.

Like others of his generation, Falkenhayn was a militarist who believed that a great European war was inevitable and that Germany should prepare accordingly. This attitude earned him the favouritism of Kaiser Wilhelm II, who was behind Falkenhayn’s surprise 1912 promotion to major-general and Prussian minister of war.

In September 1914, Falkenhayn replaced von Moltke as the Chief of General Staff, following the failure of the Schlieffen offensive.

Recognising the great difficulties along the Western Front, Falkenhayn instead focused in the east, where he hoped to force Russia to sign a separate armistice. He also initiated the assault against French positions at Verdun.

The failure of the Verdun campaign led to Falkenhayn’s replacement in August 1916. He remained in the war, serving as a commander in eastern Europe and the Middle East.

Historians consider Falkenhayn to be a true figure of the old regime: conservative, authoritarian and militaristic – but nevertheless a skilled general, more competent and innovative than many of his contemporaries.