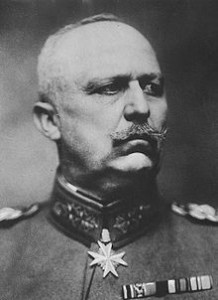 General Erich Ludendorff (1865-1937) was a German officer, famous for his staunch militarism and his service as Paul von Hindenburg’s second-in-command.

Ludendorff was born in Prussia, the son of a local landowner. His excellence as a student earned Ludendorff a scholarship to a local military academy, after which he received a lieutenant’s commission.

Erich Ludendorff proved an exceptional young officer, receiving numerous commendations, rising through the ranks and being seconded to the General Staff. He was an exceptional organiser, known in particular for his ability to plan large operations. From 1911 one of his roles was to assist with the logistics and preparations for the Schlieffen Plan.

In 1914, Ludendorff was sent to assist Hindenburg with defending East Prussia from the Russians. This marked the beginning of a long partnership, during which time Ludendorff served as Hindenburg’s chief of staff, then quartermaster-general of the Germany army.

Many historians consider Ludendorff to have been the main source of strategic and logistical ideas in this partnership, with Hindenburg a less capable but more popular figurehead.

Among the wartime policies shaped by Ludendorff was the introduction of military control over the German economy, Germany’s move towards unrestricted submarine warfare and the development of the 1918 Spring Offensive.

After the failure of the Spring Offensive, Ludendorff became depressed and resigned to the inevitability of German surrender. Despite this, after the war, he became a leading proponent of the Dolchstosslegende or ‘stab in the back theory’, which argued that the German military had been betrayed rather than defeated.

For a time in the early 1920s, Ludendorff was a fervent supporter of Adolf Hitler and the fledgeling Nazi movement. He later fell out with Hitler and attempted to start his own right-wing nationalist political movement, which attracted little support.

Title: “Erich Ludendorff (Germany)”
Authors: Jennifer Llewellyn, Steve Thompson
Publisher: Alpha History
URL: https://alphahistory.com/worldwar1/erich-ludendorff-germany/
Date published: July 18, 2017
Date accessed: July 07, 2022
Copyright: The content on this page may not be republished without our express permission. For more information on usage, please refer to our Terms of Use.