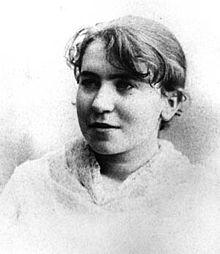 Emma Goldman (1869-1940) was a Russian-American writer and socialist who was expelled from the United States for her political activism.

Born to a working-class Jewish family in Russia, Goldman emigrated to the United States as a teenager. She worked briefly as a seamstress before moving to New York and becoming drawn into anarchist politics and journalism.

Goldman was regularly in trouble with the law. In 1892, she was involved in a plot to assassinate Henry Clay Frick, a steel company manager who had used violence against striking workers. She was later jailed for inciting criminal activity and violence. Goldman also campaigned for women’s suffrage and birth control.

From late 1914, Goldman became America’s most outspoken female anti-war campaigner, writing essays condemning the war and organising protests and rallies. Goldman was instrumental in forming the No-Conscription League of New York. She also attacked women’s and suffragette groups that abandoned their opposition to the war once America became involved.

The government tolerated Goldman’s outspokenness for a time but she was eventually arrested in 1917 and sentenced to two years in prison.

On her release, Goldman was stripped of her American citizenship and deported to Russia. She remained there until 1921, after which she settled in Britain.

Title: “Emma Goldman (US)”
Authors: Jennifer Llewellyn, Steve Thompson
Publisher: Alpha History
URL: https://alphahistory.com/worldwar1/emma-goldman-us/
Date published: July 24, 2017
Date accessed: July 07, 2022
Copyright: The content on this page may not be republished without our express permission. For more information on usage, please refer to our Terms of Use.