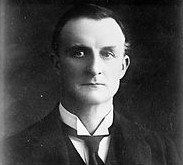 Sir Edward Grey (1862-1933) was a long-serving British politician who held the office of foreign secretary during the formative years of the war.

Born into a privileged family, Grey’s youthful years were listless: he was a mediocre student with uncertain career ambitions.

In 1885, Grey was elected to the House of Commons at the age of just 23. Seven years later, he became an under-secretary for foreign affairs despite having almost no experience or expertise in the field.

In 1905, Grey became foreign secretary in the Asquith government, a post he held for the next 11 years.

Grey’s involvement in the outbreak of World War I has long been a topic of debate. Numerous contemporaries and several historians have criticised Grey for his handling of British pre-war foreign policy and particularly the July crisis.

During Grey’s tenure, British foreign policy tended to be unclear or secretive. Other than to support Belgian neutrality, Grey gave no clear indications about how Britain might respond in the event of a war on the continent. This aloofness and lack of commitment, many have argued, only encouraged German belligerence.

During the war, Grey negotiated several treaties and agreements between Britain and her allies. The best known of these was probably the 1915 Treaty of London that brought Italy into the war.

Grey resigned from the cabinet in December 1916, moved to the House of Lords and played little role in the wartime government thereafter.

Title: “Edward Grey (Britain)”
Authors: Jennifer Llewellyn, Steve Thompson
Publisher: Alpha History
URL: https://alphahistory.com/worldwar1/edward-grey-britain/
Date published: July 12, 2017
Date accessed: July 06, 2022
Copyright: The content on this page may not be republished without our express permission. For more information on usage, please refer to our Terms of Use.