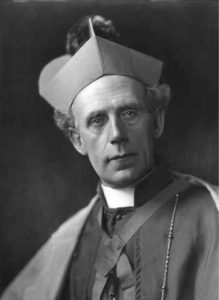 Daniel Mannix (1864-1963) was an Irish-Australian Catholic clergyman and anti-conscription campaigner.

Mannix was born to an affluent farming family in County Cork, Ireland. He was ordained into the priesthood in 1890 before undertaking further studies in divinity and theology.

In 1912, Mannix was posted to the bishopric of Melbourne, an Australian city with a large population of Irish immigrants. When war broke out in 1914 he was ambivalent at first – but as the conflict dragged on and began to open up sectarian wounds between Australian Catholics and Protestants, he began to speak out.

Mannix was particularly vehement in his defence of Irish Catholics, who many accused of shirking enlistment and not doing their ‘fair share’. Mannix spoke against the Hughes government’s attempt to introduce conscription in 1916, urging his followers to reject it.

Mannix campaigned more actively during the second conscription plebiscite in 1917, by which time Mannix had been appointed Archbishop of Melbourne.

In November 1917, he addressed a rally of around 100,000 people in Richmond, urging them to vote ‘no’ to conscription. He also condemned the conflict in Europe as “a sordid little trade war”. Both conscription plebiscites were defeated, in part because of Mannix’s outspokenness and influence with working-class Irish-Australians.

Title: “Daniel Mannix (Australia)”
Authors: Jennifer Llewellyn, Steve Thompson
Publisher: Alpha History
URL: https://alphahistory.com/worldwar1/daniel-mannix-australia/
Date published: July 29, 2017
Date accessed: June 30, 2022
Copyright: The content on this page may not be republished without our express permission. For more information on usage, please refer to our Terms of Use.