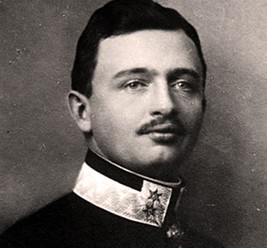 Charles I (1887-1922) was an Austrian royal who became ruler of the Austro-Hungarian empire in late 1916. Charles was the nephew of Archduke Franz Ferdinand and the great-nephew of Emperor Franz Joseph.

Charles became heir to the imperial throne after Franz Ferdinand’s murder in June 1914 (the archduke’s morganatic marriage meant his own children were disqualified from the line of succession). An educated, intelligent and likeable young man, he was given significant command duties during the war, despite having only limited military experience.

He became emperor in November 1916 after the death of Franz Joseph. Alert to the dangers faced by his empire, the new monarch sought to hold it together by extricating Austria-Hungary from the war, as well as liberal political reforms and self-government for regional and ethnic groups.

In 1917, using his brother-in-law as an intermediary, Charles made several overtures for a peace proposal – either with or without the involvement of his German allies. In May 1917, the emperor recalled the Austrian parliament, which had been suspended by his predecessor.

In October 1918, Charles attempted to re-form the Austro-Hungarian empire as a federation of self-governing states. This did not go far enough, however, and Charles lost the throne during the political upheavals of November 1918. His attempts to regain the crown came to nothing and he was forced into exile, dying there in 1922.

Title: “Charles I (Austria)”
Authors: Jennifer Llewellyn, Steve Thompson
Publisher: Alpha History
URL: https://alphahistory.com/worldwar1/charles-i-austria/
Date published: July 5, 2017
Date accessed: July 01, 2022
Copyright: The content on this page may not be republished without our express permission. For more information on usage, please refer to our Terms of Use.