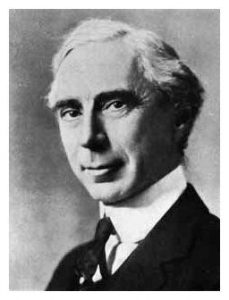 Bertrand Russell (1872-1970) was a British writer, philosopher and mathematician. He became an outspoken critic of World War I and was imprisoned for publishing these views.

Russell was born in Wales. His father was a liberal aristocrat, his mother a campaigner for female suffrage. The young Bertrand Russell was educated by tutors before going on to study at Cambridge.

After graduating, Russell wrote on mathematics and philosophy. His works were well received and he later accepted an academic post back at Cambridge.

By the turn of the century, Russell had become a prominent figure in philosophical circles, despite his youth. Liberal and pacifist by nature, he opposed the war in Europe from the outset. He considered most wars to be the products of militarism, which was itself driven by economic interests.

Russell also condemned the war as a threat to individual rights and freedoms. For this reason, he was outspoken in his defence of conscientious objectors.

In 1916, Russell was arrested and fined under the Defence of the Realm Act for publishing “statements likely to prejudice the recruiting and discipline of His Majesty’s Forces”. This conviction also led to his dismissal from the academic staff at Cambridge.

Russell was not silenced, however, and continued to write and speak at anti-war events. In 1918, he was arrested and charged again, for speaking against American involvement in the war. This time Russell was imprisoned in Brixton for six months.

Title: “Bertrand Russell (Britain)”
Authors: Jennifer Llewellyn, Steve Thompson
Publisher: Alpha History
URL: https://alphahistory.com/worldwar1/bertrand-russell-britain/
Date published: July 30, 2017
Date accessed: June 30, 2022
Copyright: The content on this page may not be republished without our express permission. For more information on usage, please refer to our Terms of Use.