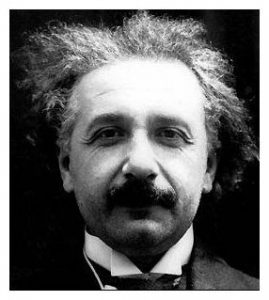 Albert Einstein (1879-1955) was a German-Swiss scientist and pacifist who voiced opposition to World War I.

Born in Germany to non-practising Jewish parents, Einstein’s family later moved to Italy and then Switzerland.

In the early years of the 20th century, Einstein worked as a patent clerk in  Bern, before commencing studies and completing a PhD in molecular studies.

Einstein went on to lecture at universities in Prague and Zurich and was considered one of Europe’s leading scientists. In mid-1914 he returned to Germany to head the Kaiser Wilhelm Institute for Physics.

The outbreak of World War I caught Einstein by surprise, however, he remained in Germany for the duration of the war.

Though most of his time was taken up with science and research, Einstein often expressed opposition for the war and contempt for those who perpetuated it. He joined three other scientists in drafting a manifesto that condemned the war and the errors that had allowed it to unfold.

Einstein also penned several editorials and letters condemning the wastefulness and needless destruction of the war. He was not yet a household name, however, so his opposition was barely noticed.

Einstein’s theory of relativity, developed immediately after the war, catapulted him to fame, and he is now regarded as probably the most famous physicist in history.

Title: “Albert Einstein (Switzerland)”
Authors: Jennifer Llewellyn, Steve Thompson
Publisher: Alpha History
URL: https://alphahistory.com/worldwar1/albert-einstein-switzerland/
Date published: July 23, 2017
Date accessed: July 07, 2022
Copyright: The content on this page may not be republished without our express permission. For more information on usage, please refer to our Terms of Use.