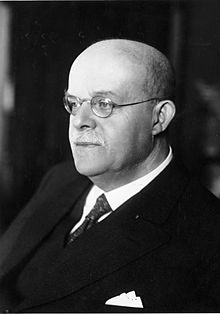 Wilhelm Marx (1863-1946) was a lawyer and Centre Party politician who served two terms as chancellor of the Weimar Republic during the 1920s. His chancellorship helped usher in Germany’s economic recovery and restored foreign relations during the mid-1920s.

Marx was born in Cologne. His father was the principal of a Catholic primary school and his family was affluent middle-class and devoutly Catholic.

After completing high school, Marx completed a law degree in Bonn. After graduation, he worked as a lawyer, court assessor, magistrate and president of the Berlin appeals court. He was also active in Catholic affairs, chairing a provincial education board and joining the Centre Party in 1895.

In 1899, Marx was elected to the Prussian Landtag. He would later sit in the imperial Reichstag, the Weimar National Assembly and the Weimar Reichstag. From the early 1920s, he served as the Centre Party chairman and its leader in the legislature.

Wilhelm Marx twice served as chancellor, leading four different cabinets. His two terms were separated by an unsuccessful tilt at the presidency in 1925. The assessment of most historians is that Marx was a pragmatist who sought to reunify Germany and find solutions for her problems.

In his first term (1923-24), Marx oversaw Germany’s recovery from hyperinflation, the finalisation of the Dawes Plan and the first steps towards rebuilding foreign relations. The latter took place under his foreign minister, Gustav Stresemann, to whom Marx gave free rein. Marx resigned as chancellor after the December 1924 Reichstag election when he was unable to form a government.

In March 1925, Marx ran for the presidency against Paul von Hindenburg. In the run-off election, Marx received the backing of the Social Democratic Party (SPD) and other centrist and liberal parties, as well as his own, but lost to Hindenburg by under one million votes.

Marx returned to the chancellorship in May 1926 after the resignation of Hans Luther. His second term was less productive and often disrupted by factional disputes and quibbling over policy. He resigned in June 1928 and was replaced by SPD leader Hermann Muller.

Marx retained his seat in the Reichstag until his retirement in 1932. He remained in Germany until his death in August 1946.