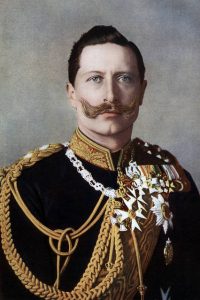 Wilhelm II (1859-1941) was the King of Prussia, the Kaiser (emperor) of Imperial Germany and the country’s nominal leader during World War I. He was removed from power during the German Revolution in November 1918 and forced into exile in Holland.

Willhelm received an authoritarian upbringing and education typical for a young prince in line to the throne. From a young age, he demonstrated a fascination for the military and acquired as many uniforms as he could.

Accompanying Wilhelm’s militarism was a German nationalism bordering on fanaticism. He was obsessed about strengthening and expanding Germany’s imperial assets and trade so that it might one day rival the British Empire, an entity Wilhelm begrudgingly admired and loathed.

These traits defined Wilhelm’s leadership after he became Kaiser in 1888. Wilhelm ousted the respected Otto von Bismarck from the chancellorship and replaced him with other strident nationalists and ‘yes men’. He adopted a more confrontational foreign policy and oversaw the rapid expansion of the German navy and submarine fleet.

Wilhelm’s impulsiveness instigated several international incidents during his reign, such a provocative speech delivered in Morocco in 1905. The Kaiser’s unconditional support for Austria-Hungary after the assassination of Franz Ferdinand – his so-called ‘blank cheque’ – was a significant cause of World War I.

Though he was an important contributor to its outbreak, Wilhelm’s leadership during the war was largely ineffectual. He relied on the advice and policies of others and exerted very little influence on military strategy or domestic policies. He became a figurehead leader, making public appearances, visiting the front and delivering addresses but doing little else.

In November 1918, with Germany on the brink of defeat and his throne at risk of a popular revolution, the Kaiser came under pressure to abdicate the throne. As with earlier in his reign, Wilhelm was unable to accept this reality. In the end, Chancellor Max von Baden announced the Kaiser’s abdication without his endorsement.

At this point, Wilhelm fled Germany for the sanctuary of neutral Holland. He was welcomed here and sheltered by the Dutch royal family, who batted away repeated requests for extradition so the former Kaiser could be put on trial for war crimes.

Wilhelm lived 23 years in retirement in Holland, penning his memoirs and following the political situation in Germany. He quietly hoped for the collapse of the Weimar Republic and the revival of the monarchy, allowing for either his return or the enthronement of his son. His views on Adolf Hitler and the National Socialists (NSDAP) were mixed.

Wilhelm II died in the Netherlands in June 1941, aged 82. His funeral was attended by several of the ex-Kaiser’s former generals, as well as Nazi dignitaries.