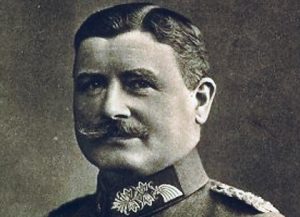 Wilhelm Groener (1867-1939) was a high-ranking military officer whose support for Friedrich Ebert and the SPD helped suppress a socialist revolution in Germany in 1918-19. He later became a minister in several Weimar governments.

Born in Württemberg in southern Germany to a military family, Groener enlisted in the army in 1884. He received an officer’s commission and rose through the ranks, serving in the Prussian war ministry.

In the first months of World War I, Groener was responsible for overseeing the movement of troops by rail to both the Eastern and Western Fronts. He was later tasked with managing important elements of Germany’s war economy.

In the final days of World War I, Groener replaced Erich Ludendorff as the army’s quartermaster-general. Along with Paul von Hindenburg, he was involved in persuading Wilhelm II to abdicate the throne.

On November 10th, Groener negotiated a secret deal with Freidrich Ebert, promising military support for the government against a socialist revolution. The Ebert-Groener pact, as became known, lost both men support in their respective organisations – Ebert in the SPD and Groener amongst his fellow military officers.

Groener oversaw the demobilisation of German troops after the armistice. He retired from the military in September 1919 but served as the Weimar Republic’s minister of transport between 1920 and 1923. He then retired from politics but returned on Hindenburg’s request in 1928.

As minister of the interior, banned the National Socialist German Workers’ Party‘s (NSDAP) paramilitary branch, the Sturmabteilung (SA), in 1931. This made him a target of Nazi vitriol and propaganda.

In 1932, Groener was ambushed on the floor of the Reichstag by Hermann Goering and other Nazi hecklers. This incident led to his resignation from the ministry and political life.

Groener retired to Potsdam to write his memoirs. He died in May 1939.