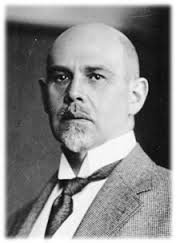 Walther Rathenau (1867-1922) was a Jewish-German industrialist, politician and the Weimar Republic’s foreign minister during the first half of 1922. He was assassinated by ultra-nationalists in June 1922.

Rathenau was born in Berlin, the son of a Jewish businessman who headed a large electrical and engineering firm. He studied engineering, physics and chemistry, obtaining a doctorate in 1889.

After graduating, Rathenau joined the family business, first as an engineer and then as an executive. By 1914, he had replaced his father as the chairman of the board.

During World War I, Rathenau was a keen nationalist, a supporter of the war effort and an important figure in the German war economy. He was recruited by the Wilhelmine government to oversee the management of raw materials necessary for war production.

After the war, Rathenau involved himself in politics, becoming a founding member of the German Democratic Party (DDP). He became a political liberal who believed in a mixed economy of privately-owned capital, state controls and organised labour.

In May 1921, German chancellor Joseph Wirth appointed Rathenau as his minister of reconstruction. In this position, Rathenau advocated Germany’s acceptance of the Treaty of Versailles and war reparations.

The following January, Rathenau was elevated to the foreign ministry, where he negotiated the Treaty of Rapallo with the Soviet Union.

These policies made Rathenau a target for radical nationalist groups like the National Socialists (NSDAP), who condemned him as a ‘November criminal’ and a Jewish-communist conspirator. Like Matthias Erzberger before him, Rathenau became the target of vitriolic attacks in the right-wing press.

In June 1922, Rathenau was assassinated in Berlin. His car was ambushed, shot up and destroyed by a grenade as Rathenau was driving to work. His killers were members of the Freikorps, Organisation Consul (a right-wing terrorist group) and the Protection and Defiance Federation (an anti-Semitic group).

Rathenau’s murder was condemned by almost all political parties and for a time led to the marginalisation of ultra-nationalist groups like the NSDAP.