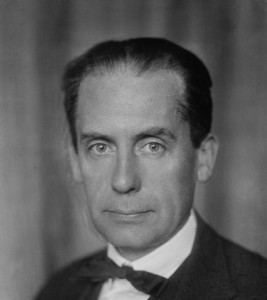 Walter Gropius (1883-1969) was a German architect, designer and academic. He is widely acknowledged as the founder of the Bauhaus artistic and architectural movement.

Gropius was born in Berlin to an upper-middle-class family of Prussian origins. His father, also named Walter, was a building inspector well versed in the basics of architecture and construction.

Walter Junior studied architecture in both Berlin and Munich before undertaking a study tour of Spain, France and Britain.

In 1910, Gropius established his own architectural practice in Berlin. He explored modernist designs in his work, abandoning the use of traditional materials like stone in favour of glass and steel.

During World War I, Gropius was conscripted into the military. He served as an officer on the Western Front.

In 1919, Gropius was appointed as head of the Weimar School of Arts and Crafts. Under his tutelage, this institution became the crucible of Bauhaus, a movement that Gropius claimed would “embrace architecture and sculpture and painting in one unity… rising toward heaven from the hands of a million workers”.

At the Bauhaus school, several artists, including Gropius himself, pioneered new styles and designs in art, architecture, decor, furniture, interior design and typography.

Bauhaus became Weimar Germany’s best known artistic oeuvre. The Bauhaus building in Dessau – with its modular shapes, glass panes and distinctive sign – was both a model and a temple for the movement.

In the late 1920s, Gropius moved away from the Bauhaus school and returned to private practice in Berlin, where he designed large public housing projects.

In 1934, Gropius was forced to flee Nazism, later taking up residence in the United States.