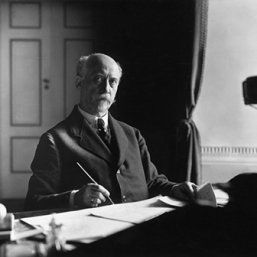 Philipp Scheidemann (1865-1939) was a German politician and a significant figure in the Social Democratic Party (SPD). He proclaimed the birth of the Weimar Republic in November 1918 and served briefly as German chancellor in 1919.

Scheidemann was born into a working-class family in Kassel. At 14, he began an apprenticeship as a printing typesetter. He worked for two decades as a typesetter, proofreader and journalist.

A member of the printers’ trade union and the SPD since his teenage years, Scheidemann was elected to the Reichstag in 1903. He held this seat until 1918. A skilled and often witty public speaker, Scheidemann was the SPD’s de facto parliamentary leader during World War I.

On November 9th, chancellor Max von Baden announced the abdication of Kaiser Wilhelm II. Scheidemann responded by delivering a public address announcing the creation of a new German republic. He did this spontaneously, without the approval or backing of either Friedrich Ebert or the SPD.

In February 1919, the National Assembly at Weimar chose Scheidemann to serve as the republic’s first chancellor, under Ebert’s presidency. Scheidemann’s first cabinet was dominated by members of the SPD but also included members of the Centre Party, the German Democratic Party (DDP) and independents.

During his brief time as chancellor, much of Scheidemann’s attention was taken up with consolidating the new republic, dealing with separatist socialist regimes within Germany and armistice and peace negotiations with the Allies.

Scheidemann resigned as chancellor as a response to the Treaty of Versailles, which he and several members of his government refused to sign. Scheidemann remained on the SPD executive and was elected to the Weimar Reichstag the following year.

His role in the SPD and the formation of the Weimar Republic made Scheidemann a much-hated figure and a target of several assassination plots. In June 1922, two young men attempted to kill or blind Scheidemann by spraying him with prussic acid. The former chancellor was not seriously harmed.

Scheidemann remained in the Reichstag until the rise of Adolf Hitler and the National Socialists (NSDAP) in early 1933. Recognising the dangers to himself, he fled Germany for Denmark via France and the United States. He remained there until his death in 1939.