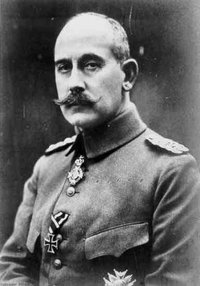 Max von Baden (1867-1929) was a German royal, military officer and politician who served briefly as chancellor in the first days of the Weimar Republic.

Baden was born in the south-western resort town of Baden-Baden. He was a minor royal, the son of Prince Wilhelm Max and a cousin of the French emperor Napoleon III.

Educated in his hometown and Leipzig, Baden studid law and administration before joining the Prussian military. He remained in the army for more than 25 years, reaching the rank of major-general before retiring in 1911.

Baden returned to the military on the outbreak of World War I, serving as a staff officer. Troubled both by the war and his own role in it, Baden returned home in October 1914.

For the rest of the conflict, Baden devoted himself to charitable and humanitarian relief, particularly for prisoners-of-war. He was also critical of Germany’s war strategy, particularly its resumption of unrestricted submarine warfare in 1917.

Baden had never held national office or sat in the Reichstag and most Germans had never heard of him. His humanitarian work was well known, however, and his appointment was meant to convince the Allies that Germany was embarking on political liberalisation.

Baden was no democratic reformer, however. He came to office seeking to preserve the monarchy rather than abolish it. The threat of a communist revolution quickly changed his views and by mid-October, Baden was encouraging the Kaiser to consider abdication. His other significant actions included dismissing Erich Ludendorff and approaching the United States to seek an armistice and peace negotiations.

On November 9th, after weeks of seeking unsuccessfully seeking Wilhelm II’s abdication, Baden announced it anyway, without the Kaiser’s knowledge or endorsement. He resigned the chancellorship on the same day, passing it to Friedrich Ebert.

Baden refused an invitation into the transitional National Assembly and retired to his native duchy to open a boarding school. He died in November 1929.