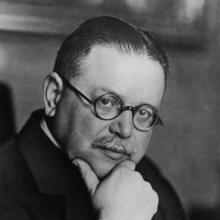 Erzberger was born in Württemberg, southern Germany, the son of a Catholic artisan. In his youth, he trained as a schoolteacher before becoming a journalist with Deutsches Volksblatt.

Erzberger was elected to the Reichstag in 1903, representing the Centre Party. He became known for his progressive views, criticising the government for its management of Germany’s African colonies.

In 1914, Erzberger voted in favour of Germany’s military buildup and supported the war effort, at least in its early years. By 1917, however, Erzberger was leading a sizeable Reichstag coalition calling for a negotiated peace.

In November 1918, Erzberger travelled to France to head armistice negotiations with the Allies. He was the lead signatory on the armistice document, signed on November 11th. Later, he urged the acceptance of the Treaty of Versailles.

Erzberger became a minister in the first Weimar cabinet under Philipp Scheidemann. He later served as vice-chancellor and finance minister under Gustav Bauer.

As the struggling republic’s financial chief, a critic of military power and the chief signatory of the armistice, Erzberger was a prime target for ultra-nationalists purveying the ‘stab-in-the-back’ conspiracy theory.

The right-wing press unleashed on Erzberger in 1920, accusing him of treason and corruption, ridiculing his weight and even hinting that he should be assassinated.

These attacks, along with an unfavourable court verdict, prompted his resignation as finance minister in March 1920. This did little to halt the vitriolic press campaign against him, which continued into 1921.

In August 1921, two members of the Freikorps and Organisation Consul followed these suggestions, shooting Erzberger to death in the Black Forest. His murder generated outrage across Germany and his funeral was marked by a series of political speeches.