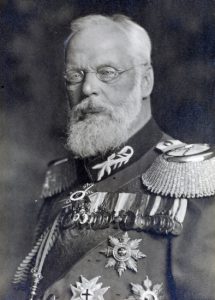 Ludwig III (1845-1921) was the last king of Bavaria in southern Germany. He fled his kingdom in November 1918 during the German Revolution.

Ludwig Wittelsbach was born in Munich, the son of the Bavarian prince regent. Since he was not an heir to the Bavarian throne, Ludwig enlisted in the Austrian military at age 16. In 1866, he served in the Austro-Prussian War, where he received a serious injury to his leg.

Two cases of royal insanity altered the plan of succession in Bavaria and in November 1913, Ludwig became its king. Bavaria entered World War I the following year due to its long-standing alliance with Prussia.

Ludwig supported Germany’s war effort but otherwise played little role in the war. An apocryphal story claims he personally endorsed Adolf Hitler‘s application to join the Bavarian military, though this is unlikely.

In the final weeks of the war, Bavaria endured unrest, political violence and the threat of socialist revolution. During this period, Ludwig gave formal approval for the transition from a royal government to parliamentary democracy.

Worsening conditions caused Ludwig and his family to flee Bavaria to Austria, where he ceded power to Kurt Eisner. Ludwig did not consider this an abdication because he hoped to return to Bavaria once the situation had settled. Eisner and others interpreted it differently, however, and the Bavarian monarchy was abolished, the first of several German thrones to fall in 1918-19.

The former king returned to Bavaria but was forced to flee again in 1919, this time to Hungary. He died there in October 1921. Ludwig’s body was interred alongside his royal ancestors in Munich and his funeral drew enormous crowds.