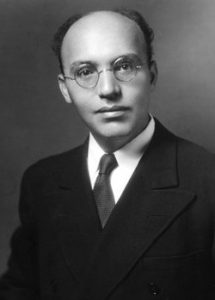 Kurt Weill (1900-1950) was a Jewish-German musician and composer whose musicals and vocal pieces became popular during the Weimar period. Several of Weill’s pieces, like his signature work The Threepenny Opera, exhibited frustration with the nature of capitalism and human greed.

Weill was born into a Jewish family in Saxony, the son of a choirmaster. He received piano lessons as a child and by the age of 15 was giving public performances.

After matriculating from high school, Weill attended a prominent music college in Berlin. At the end of World War I, he returned to his hometown to help support his family by working as an accompanist.

Weill returned to Berlin in 1920 for further study. He then began composing both classical and modernist pieces while making a living through private tuition and writing reviews.

As the German economy recovered in the mid-1920s, so did interest in musical theatre, and Weill’s musicals and vocal pieces became increasingly popular. Several of his light operas were written in partnership with Expressionist dramatist Georg Kaiser.

Weill’s best-known work was a musical play called The Threepenny Opera, first performed in 1928. Written in collaboration with Bertolt Brecht, The Threepenny Opera was rich with political overtones about capitalism, inequality, value systems and man’s disregard for his fellow man.

One song from The Threepenny Opera, “Die Moritat von Mackie Messer“, became popular in the United States and elsewhere as “Mack the Knife”. While its tempo and music are upbeat, its lyrics tell of a man who kills others for money without a shadow of conscience.

Weill’s Jewish background and left-wing political views made him a target for the National Socialists (NSDAP). Several of his works were heavily criticised in the right-wing press and some performances were interrupted by Nazi or pro-Nazi hecklers.

Weill himself fled Germany just weeks after Hitler came to power in 1933. He lived for a time in Paris before relocating to New York. He continued to write music for American films and theatre until his death in April 1950.