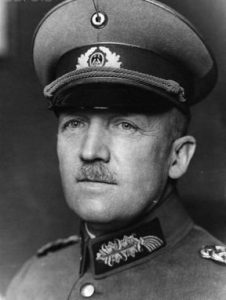 Kurt von Schleicher (1882-1934) was a German military officer turned politician. He is best known as the chancellor replaced by Adolf Hitler and as a victim of the Nazis’ ‘Night of the Long Knives’ purge in 1934.

Schleicher was born in Brandenburg, east of Berlin, the son of a military officer. He followed in his father’s footsteps by enrolling in the army on his 18th birthday. He later served in the transport department of the General Staff.

A captain at the outbreak of World War I, Schleicher saw little combat or active command, perhaps due to his unpredictable temperament. Instead, he remained chiefly in staff positions, where his organisational skills and understanding of logistics were highly regarded.

A skilled intriguer (his surname translates as ‘the sneaker’), Schleicher’s career was assisted at various times by Wilhelm Groener, Hans von Seeckt and Paul von Hindenburg, whose presidency Schleicher actively praised and promoted.

During the 1920s, Schleicher filled several important but behind-the-scenes positions in the Reichswehr and the government, often serving as the link between the two. He was an aid to defence minister Groener (1930-32) and then defence minister under another of his former army colleagues, Franz von Papen (1932).

When Papen was forced to resign as chancellor in December 1932, Schleicher convinced Hindenburg that he should replace him. Faced with the rising tide of Nazism, as well as undermining from Papen, Schleicher’s chancellorship lasted less than two months, making it one of the shortest and least effective of the Weimar period.

After his resignation, Schleicher nurtured hopes of becoming defence minister in Hitler’s cabinet – but his rivals convinced the Nazi leader that Schleicher was orchestrating a plot against him.

Schleicher remained active in military and political circles, a decision that sealed his fate. On June 30th 1934, Schleicher became one of the first and highest-profile victims of Hitler’s ‘Night of the Long Knives’, gunned down with his wife in the hallway of their Neubabelsberg home.