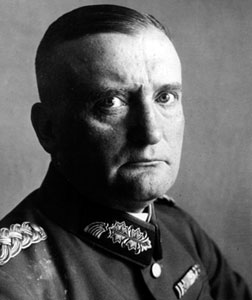 Kurt von Hammerstein-Equord (1878-1943) was a Prussian military officer who became commander-in-chief of the Reichswehr during the early 1930s. He was a friend and political ally of Kurt von Schleicher and warned against the dangers of appointing Adolf Hitler as chancellor.

Hammerstein was born in Hinrichshagen in north-eastern Germany to a family of Prussian noble background. From childhood, he was educated and trained for a military career, joining the Prussian cadets at age 10.

After completing his training, Hammerstein joined the German army in 1898 and was commissioned as a lieutenant. He served alongside another young officer, Kurt von Schleicher, and the two became friends.

During World War I, Hammerstein served as a quartermaster and a staff officer in various locations, won the Iron Cross on the Western Front and later saw action on the Eastern Front in Romania.

Hammerstein remained in the army after the armistice. In 1919, he served under his father-in-law, Walther von Lüttwitz, though Hammerstein refused to support the 1920 coup d’etat attempted by Lüttwitz and Wolfgang Kapp.

Though he tried to maintain his distance from Weimar party politics, Hammerstein’s personal views were liberal, particularly for a general of the Reichswehr. He supported the Reichstag and the republic but had no regard for extremists, particularly those on the right.

Hammerstein was particularly critical of Adolf Hitler, the National Socialists (NSDAP) and the Sturmabteilung, who he condemned as “criminals” and “perverts”. In late 1932, he promised Hitler that he would order his troops to shoot in the event of a Nazi-led coup.

In contrast, Hammerstein was sympathetic to trade unions and his two young daughters, Marie-Luise and Helga, were active members of the German Communist Party (KPD).

Hammerstein was given command of the Reichswehr in 1930 and spent much of the next two years trying to prevent Hitler’s appointment as chancellor. He resigned as Reichswehr chief in early 1934.

Despite remaining in the military, Hammerstein became a strong and often outspoken critic of Hitler. He was outraged by the Nazis’ murder of Schleicher in June 1934. During World War II, Hammerstein organised several plots to assassinate Hitler but an opportunity did not arise.

Kurt Hammerstein-Equord died in April 1943 after a long battle with cancer. His family rejected the offer of a Nazi funeral and discarded a wreath containing Hitler’s condolences.