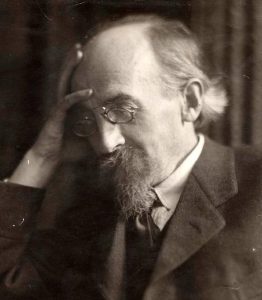 Kurt Eisner (1867-1919) was a German journalist, philosopher and socialist revolutionary. He served briefly as president of the Bavarian socialist republic until his assassination in early 1919.

Born in Berlin to middle-class Jewish parents, Eisner studied philosophy and literature at the University of Marburg. After graduating he worked as a journalist in Frankfurt and Berlin, then editor of the Social Democratic Party (SPD) newspaper Vorwärts.

Eisner relocated to Munich and became a Bavarian citizen. Though he despised the Kaiser and the monarchy, he supported the German war effort at first, though this changed over time.

In 1917, Eisner joined the Independent Social Democratic Party (USPD). The following year, he was arrested and imprisoned for organising anti-war strikes among munitions workers.

In November 1918, Eisner led a socialist revolution that removed Ludwig III and abolished the monarchy. He formed the People’s State of Bavaria and pledged a moderate form of socialism, promising to protect property rights and existing interests. He also attempted to blame the war on “Prussian madmen”.

Despite these promises, Eisner’s fledgeling government failed to improve conditions or deliver services so quickly lost whatever support it had. His growing unpopularity was exposed in January 1919 Landtag elections where Eisner’s USPD won just three per cent of the votes.

Eisner was gunned down in the streets of Munich by Anton von Arco-Valley, a right-wing nationalist with strong anti-Semitic views. Arco-Valley was convicted of his murder but like Adolf Hitler five years later, received a light sentence of just five years in prison.