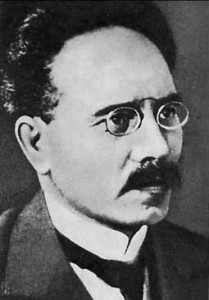 Karl Liebknecht (1871-1919) was a German socialist theorist, writer and political leader. He was a leader of the Spartacist movement that attempted to seize control of Berlin in 1918-19.

Born in Leipzig, he was the son of Wilhelm Liebknecht, a founding member of the Social Democratic Party (SPD) who had spent time in prison under Bismarck’s anti-socialist laws.

After completing high school, Karl Liebknecht studied law and economics in Berlin and Leipzig, obtaining a doctorate. His studies were partially funded by scholarships from the SPD.

Liebknecht served briefly in the military in Potsdam before turning his attention to practising law. He worked for several years as a barrister in Westphalia and Berlin, often defending those charged with spreading socialist propaganda. His addresses to juries often took the form of political speeches against the imperial government.

While practising law, Liebknecht also busied himself writing political treatises. His best-known work, Militarismus und Antimilitarismus, was an attack against Prussian militarism. Its publication in 1907 saw him sentenced to 18 months in prison.

Liebknecht ran for and won a seat in the Prussian Landtag while still in prison. He was subsequently released and, in 1912, was elected to the Reichstag. On the floor of the house, he regularly attacked the government and espoused socialist views.

After the outbreak of World War I, Liebknecht voted with the SPD in support of war credits but within weeks was voicing his opposition to the war. By 1915, he had become Germany’s most vociferous anti-war figure. The government attempted to silence Liebknecht by conscripting him into the military, where he completed arduous non-combatant work such as burying the dead.

Liebknecht’s anti-war stance brought him into conflict with SPD leaders and he was expelled from the party in 1916. Together with Rosa Luxemburg, he formed the Spartakusbund to agitate for the overthrow of the government. He was again arrested and imprisoned, this time until late October 1918.

After his release, Liebknecht mimicked the Bolsheviks in Russia, attempting to foment a socialist revolution in Germany’s cities. When the Kaiser abdicated on November 9th, Liebknecht claimed power on behalf of the Spartacists but he was pushed aside by the mainstream SPD.

By the end of 1918, Liebknecht had attracted a considerable level of support, though not enough to seriously challenge Friedrich Ebert‘s provisional government or the German military.

When Berlin was gripped by demonstrations and street-fighting in early January 1919, Liebknecht sought to intensify it into an insurrection and a workers’ revolution, despite his earlier opposition to violence. The Spartacist Uprising, as it became known, collapsed after less than two weeks.

On January 15th, Liebknecht was discovered hiding in suburban Berlin and handed over to Freikorps officers, who tortured and executed him. The SPD failed to bring the perpetrators to justice, which led to claims that Ebert and other party leaders supported Liebknecht’s murder.