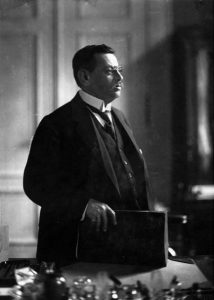 Hugo Preuss or Preuß (1860-1925) was a Jewish-German lawyer, liberal politician and the chief architect of the Weimar constitution.

Born in Berlin, the son of a Jewish printer, Preuss studied law and humanities at universities in Berlin and Heidelberg. He graduated with a law doctorate in 1883 and returned to academia as a lecturer.

In time, Preuss became widely respected as a political theorist of liberal-progressive views. He became involved in local politics and stood unsuccessfully as a Reichstag candidate in 1912.

In late 1918, Preuss published several essays on the political situation in Germany, arguing for liberal reforms and a popularly supported republic. These writings were admired by Friedrich Ebert, who appointed Preuss as his first minister for home affairs.

In February 1919, Preuss was appointed as the Weimar government’s minister of the interior. He was also tasked with overseeing the drafting and development of a new republican constitution.

Preuss resigned from the cabinet in June 1919, chiefly as a protest against the Treaty of Versailles. He continued to work on his draft constitution, however, presenting it to the assembly in July. After some significant changes, it was adopted the following month.

Though Preuss produced a constitution with safeguards and checks and balances, he expressed significant doubts about whether it would work in practice. Preuss and his constitution were attacked by the reactionaries and anti-Semites on the right.

Hugo Preuss became involved in Prussian state politics and continued to write on political and constitutional matters. He died in Berlin in October 1925.