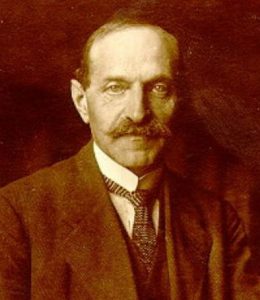 Hugo Haase (1863-1919) was a German socialist who played an important role in the first year of the Weimar Republic. He was the founder and first leader of the Independent Social Democratic Party (UPSD).

Haase was born in the Prussian town of Allenstein, the son of a Jewish cobbler. A talented student, he studied law in Konigsberg. He became interested in Marxism and joined the Social Democratic Party (SPD).

After serving in municipal government, Haase was elected to the Reichstag in 1897. He would serve two terms in the legislature. In 1913, he became a co-leader of the SPD alongside Friedrich Ebert and Philipp Scheidemann.

When World War I erupted in August 1914, Haase voted in support of war credits initially but quickly changed his position. By early 1915, he had become a vocal critic of the war both in and outside of the Reichstag.

Haase’s position continued to radicalise and he became increasingly marginalised within the party. In 1917, he broke from the SPD to become a founder and the first chairman of a new anti-war party, the Independent Social Democratic Party (USPD).

At the end of the war, Haase returned to the government to contribute to the development of a new state. On November 10th 1918, he was named as co-chairman, with Ebert, of the Council of People’s Deputies, a six-man council that assumed the Kaiser’s executive power.

The old political divisions remained, however, and less than two months later, Haase and two other USPD ministers resigned from the Council, after it authorised military action against mutinous sailors. Despite this, Haase and his party continued to work with the USPD.

In October 1919, Haase was assassinated by a young gunman while entering the Reichstag building. His assassin was declared insane by government physicians but his real motives are unknown.