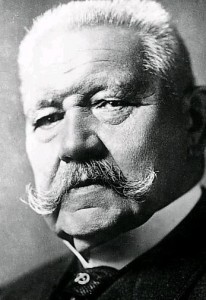 Paul von Hindenburg was a Prussian aristocrat who served as Germany’s commander-in-chief during World War I. He was elected as the Weimar Republic’s second president in 1925. The Hindenburg presidency lasted nine years.

Hindenburg’s election proved controversial abroad, where it was seen as a regression to Prussian nationalism and authoritarianism. For the most part, however, Hindenburg adhered to the principles of the Weimar constitution. His presidency, however, is best remembered for Hindenburg’s decision to appoint Adolf Hitler as chancellor in January 1933.

Hindenburg was the son of a Prussian aristocrat and, like other scions of the Junker elite, he was given a military education. After obtaining a commission at age 18, Hindenburg saw combat in the Austro-Prussian War (1866) and the Franco-Prussian War (1870-71), remaining in the military for half a century.

In 1911, 64-year-old Hindenburg left the army, intending to retire to his sizeable land holdings in Prussia. He was recalled after the outbreak of World War I and sent to fortify East Prussia against a Russian offensive. His successes earned him acclaim and popularity in Germany.

This reputation was overstated and partly undeserved, since many of Hindenburg’s notable successes were largely the work of subordinates, like Erich Ludendorff. In contrast, the Western Front failures of Germany’s chief of staff Erich von Falkenhayn left his reputation in tatters.

Hindenburg was promoted to field marshal and, in August 1916, replaced von Falkenhayn as commander-in-chief.

In October 1918, with Germany’s defeat imminent, Hindenburg retired a second time. The following year, he appeared before a Reichstag commission of inquiry into the war. Hindenburg fuelled the Dolchstosselegende (‘stab in the back’ legend) by asserting that the German army was not defeated on the front, it had been undermined and betrayed in Berlin.

Politically, Hindenburg remained committed to a government dominated by the Prussian monarchy. He loathed liberalism, socialism and the Social Democratic Party (SPD) and doubted that democratic parliamentary government could ever succeed in Germany.

By 1920, Hindenburg had disappeared from public life again. He settled back to the retirement of a wealthy Prussian aristocrat.

The death of Friedrich Ebert in February 1925 thrust Hindenburg back into the spotlight – and into political life.

After Ebert’s death, the retired field marshal was lobbied by former military colleagues, particularly Admiral Alfred von Tirpitz. These figures urged Hindenburg to run for the presidency, chiefly to keep it out of hands of the SPD or Centre Party.

Though he initially said no, Hindenburg eventually agreed to stand. His path was cleared when the German People’s Party (DVP) candidate, Karl Jarres, stepped aside and allowed Hindenburg to take his place.

In the April run-off election, Hindenburg was backed by the four main right-wing parties, including the National Socialists (NSDAP). He was also supported by the German press, which made much of Hindenburg’s personal conduct and decency, his status as a war hero and his reputation for strength and leadership.

Hindenburg won 48 per cent of the vote and narrowly defeated the Centre Party candidate, Wilhelm Marx (45 per cent).

Hindenburg’s election caused shock waves around Europe, where Hindenburg was still reviled for prosecuting and prolonging the war.

Paris and London were horrified that a Prussian militarist and former World War I commander could be elected head of state of a supposedly democratic republic.

Some interpreted Hindenburg’s election as a revival of German authoritarianism. Others went further, seeing it as the first step towards the implementation of a military dictatorship.

Adherence to the constitution

To Hindenburg’s credit, this was furthermost from his mind. While Hindenburg would personally have welcomed the return of the Wilhelmine monarchy, he had no intentions of ruling as a dictator or betraying the Weimar constitution.

For much of his nine years in the presidency, Hindenburg acted as a benign, apolitical and non-interventionist head of state. He remained aloof from party politics and bickering. He did not interfere in policy formation and in most cases, he acted on the advice of his ministers.

This commitment to constitutional and democratic processes was not easy to maintain, given that Hindenburg was surrounded by an inner circle of advisers who were mostly anti-democratic. For much of his presidency, Hindenburg was able to resist their attempts to undermine and sabotage the republic – at least until late 1932.

A historian’s view:
“His cross-party nomination [in 1925] was presented as an antithesis to Weimar’s parliamentary bickering and social discord. Carefully suppressing the political bargaining that had secured his nomination, the right portrayed Hindenburg as a symbol of national unity towering above the party strife, a ‘man who leans neither left or right, not towards the monarchy and not towards the Republic, but only knows his duty to serve the state and the people’. In emphasising the theme of national unity the right-wing campaign could build upon the Hindenburg myth. The motifs of loyalty, duty and sacrifice also featured equally prominently.”
Anna von der Goltz

1. Paul von Hindenburg was a career officer of Prussian aristocratic birth. He was recalled to service in 1914 and played a significant role in the first years of the war.

2. In August 1916, Hindenburg became commander-in-chief of the German military. He also wielded considerable influence over German domestic policy in 1917-18.

3. Hindenburg resigned in October 1918, shortly before the armistice and again retired from public life – but not before perpetuating the ‘stab in the back’ myth.

4. After the death of Friedrich Ebert, Hindenburg was convinced to run for the presidency. Supported by right-wing parties and the press, he narrowly won the 1925 election.

5. As president, Hindenburg acted with dignity and caution, for the most part. He distanced himself from party politics and sought to uphold the constitution and republic.

Citation information
Title: “The Hindenburg presidency”
Authors: Jennifer Llewellyn, Steve Thompson
Publisher: Alpha History
URL: https://alphahistory.com/weimarrepublic/hindenburg-presidency/
Date published: October 6, 2019
Date accessed: Today’s date
Copyright: The content on this page may not be republished without our express permission. For more information on usage, please refer to our Terms of Use.