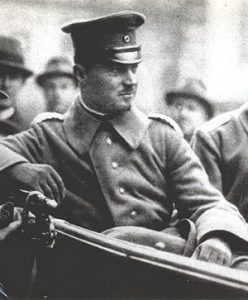 Hermann Ehrhardt (1881-1971) was a German military officer and nationalist. He became a significant leader of the Freikorps, participated in the failed 1920 Kapp putsch and opposed the National Socialists (NSDAP).

Erhardt was born in Diersburg in south-western Germany. As a youth, he showed a fascination for guns and military culture and was something of a troublemaker, once accidentally shooting a girl in the ribs. Erhardt was expelled from high school for assaulting a teacher.

Erhard joined the Imperial German Navy in 1899 and received an officer’s commission. He led a flotilla of torpedo boats during World War I, sank three British destroyers and reached the rank of lieutenant-commander.

Like many other military officers, Erhardt was a conservative nationalist concerned about the political direction of the new republic. He was particularly worried about the threat of a communist revolution and the government’s inability to withstand it.

In January 1919, Erhardt formed a Freikorps unit, later dubbed Marine-Brigade Erhardt, in Wilhelmshaven. His objective was to combat and crush left-wing revolutionary groups that were emerging across Germany.

At its peak, Erhardt’s Freikorps brigade contained around 6,000 men, including many of sailors and marines formerly under his wartime command. At the beginning of 1919, the brigade wrestled control of several naval bases from mutinous sailors, before marching to cities in the interior to battle communist insurrections.

Erhardt’s men participated in the defeat of the Bavarian Soviet Republic in April 1919, then proceeded to Upper Silesia to battle Polish separatists. By the start of 1920, Erhardt and his men were stationed in Brandenburg, not far from Berlin.

In February 1920, defence minister Gustav Noske ordered the dissolution of the two largest Freikorps brigades, one of which was Erhardt’s. This order gave rise to a nationalist-military counter-revolution, orchestrated by Walther von Luttwitz and led by Wolfgang Kapp. Erhardt pledged his support to this putsch but it failed within several days.

Erhardt fled Germany for several weeks before returning to live secretly in Bavaria. Along with former members of his brigade, Erhardt formed Organisation Consul, a secret paramilitary and terrorist group with an ultra-nationalist agenda.

Organisation Consul was responsible for the assassination of Weimar ministers Matthias Erzberger and Walther Rathenau. Suspected of involvement in Rathenau’s murder, Erhardt spent several months in prison before escaping with the help of collaborators.

Many Marine-Brigade Erhardt members abandoned Erhardt to join the Nazi movement, including the Sturmabteilung and the Schutzstaffel. Erhardt had a strong distrust of Adolf Hitler, however, once describing the NSDAP leader as “an idiot”. Erhardt eventually joined the NSDAP but only to infiltrate and destabilise it.

Erhardt fled to Austria after being targeted during the ‘Night of the Long Knives’ purge. He later returned to Germany, with Hitler’s approval, and was imprisoned again for plotting against him. Erhardt retired to Austria after the war and died there in September 1971.