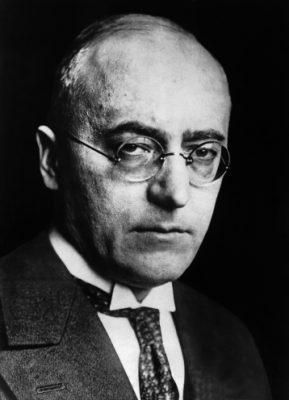 Heinrich Brüning (1885-1970) was a Centre Party politician and the longest-serving chancellor of the Weimar Republic – somewhat ironically, given that his time in office coincided with the worst of the Great Depression.

Brüning was born in Munster in north-western Germany, the son of a Catholic wine merchant. He excelled at his studies, attending universities in Munich, Strassburg, Bonn and London.

On the outbreak of World War I, Brüning volunteered for the Germany Imperial Army and obtained a commission. He served with distinction in the war, commanding a machine-gun company and winning the Iron Cross.

After the war, Brüning joined the Prussian bureaucracy, working in the Ministry of Welfare. He also joined the Catholic Centre Party, obtaining seats in the Prussian Landtag and, in 1924, the national Reichstag.

Deserved or not, Brüning acquired a reputation as a skilful economic manager. His policies were generally austere and aimed at limiting government spending and preventing inflation.

Brüning’s reputation led to Paul von Hindenburg appointing him chancellor in 1930, as Germany was plunging into depression. Brüning’s response to the growing crisis was to increase taxation and revenue and curtail government spending. He had little support in the Reichstag and most of his policies were implemented by decree from Hindenburg.

When the president withdrew his support in 1932, Brüning was forced to resign.

Brüning remained in the Reichstag as a vocal critic of the Nazi movement before fleeing Germany in 1934. He lived in the United States from the late 1930s, holding a professorship in government studies at Harvard University.

After World War II, Brüning returned to Germany and worked at the University of Cologne.