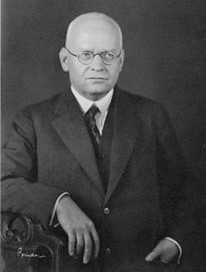 Hans Luther (1879-1962) was a German lawyer, administrator and politician. He is best known for taking measures to resolve the 1923 hyperinflation crisis while finance minister. Luther also served as chancellor in 1925-26.

Luther was born in Berlin, the son of an affluent merchant. After completing matriculation exams, he studied law in Berlin and Geneva, graduating with a doctorate in 1904.

After graduation, Luther worked in the public service. By the end of World War I, he was mayor of the city of Essen, earning acclaim as an effective administrator.

Luther entered the national government in 1922 when he was appointed as minister of food by chancellor Wilhelm Cuno. Cuno had initially offered Luther the more senior ministries of the interior and economics but he declined.

Luther became minister of finance in October 1923, a point where the hyperinflation crisis was reaching its worst. He acted immediately by implementing a plan to increase tax revenue, reduce the budget deficit and reform and stabilise Germany’s currency.

In January 1925, President Friedrich Ebert appointed Luther chancellor and invited him to form a government. The cabinet Luther chose was dominated by bureaucrats and experts with only a single representative from each major party.

Under Luther, the Weimar government made some significant advances, particularly in foreign affairs and trade. Among these achievements were the signing of the Treaty of Locarno (October 1925), Germany’s admission to the League of Nations (September 1926) and trade deals with Britain, France and the Soviet Union.

Luther resigned the chancellorship in May 1926 after a petty dispute with the Reichstag over the displaying of national flags. After this, he served on the board of the Reichsbank and became its president in 1930.

In 1932, Luther survived an assassination attempt after being shot by a deranged man. The following year, he was appointed German ambassador to the United States, a position he held for four years.

Luther returned to Germany and retirement, later working occasionally as an academic and a political advisor. He died in Dusseldorf in May 1962.