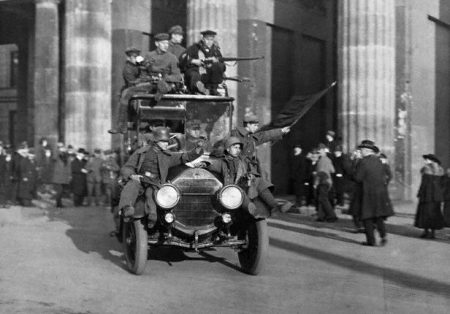 Germany in late 1918 was a nation on the brink of both military defeat and economic collapse. Four years of total war had produced millions of casualties and reduced the German people to a state of impoverishment and starvation. This made the collapse of the Wilhelmine monarchy and German political system probable, if not inevitable.

On the cusp of defeat

With hindsight, the capitulation of Germany at the end of World War I seems inevitable. Her attempts to avoid a two-front war failed in the first weeks of the war. Germany found itself surrounded, blockaded and starved by her enemies. By 1918, she was also being deserted by her allies and failed by her leaders.

Only a year before, however, many Germans – and indeed some neutral observers – were anticipating a German victory in Europe. Two revolutions spelt the end of Russia’s involvement in World War I and by the end of 1917, the Russians were effectively out of the war.

With the war on the Eastern Front all but over, Germany had more than a million men she could relocate to the Western Front. The United States’ April 1917 declaration of war loomed as a potential obstacle – but the German General Staff believed a final major offensive could break through weakened Allied defences before any significant influx of American troops.

In November 1917, Field Marshal Paul von Hindenburg authorised plans for this major offensive. It was scheduled for March-April 1918 and later dubbed the Spring Offensive.

The German objective was the penetration of the Western Front at two of its weaker points.  One army would advance to threaten Paris and force the exhausted French to sign an armistice. Another larger force would outflank British forces, push them north and hem them in along the North Sea coast, forcing a surrender.

To prepare for this offensive, German commanders ordered every Western Front division to release its most capable battle-hardened soldiers. These men were organised into battalions of shock troops called Sturmmann (‘stormtroopers’); they were given training in how to infiltrate enemy lines through pre-determined weak points.

The offensive began with some promise. Sturmmann advances were initially successful and led to incursions and rapid gains of enemy-held territory. In some areas, the Western Front was pushed back 60 kilometres, its most significant movement since 1914. German troops advanced close enough to Paris to allow them to shell the city with a massive artillery piece.

Much like the Schlieffen Plan of 1914, however, the advances of spring 1918 proved impossible to sustain. The stormtroopers moved more quickly than their supply lines so constantly found themselves short of food, ammunition and reinforcements. The use of Germany’s best troops meant they suffered a higher rate of casualties, while the quality of rear defensive positions was weakened.

The attack gained considerable ground but at a significant cost and by July 1918, it had lost its momentum. Almost one million German soldiers died in this six-month period. Hindenburg’s advisors told him 1.1 million new soldiers would be needed to sustain the war into 1919 – but conscription would barely fill one-quarter of this quota.

On top of this military problem, Germany was starving. This was the product of almost four years of total war, the Allied naval blockade that prevented food imports and labour shortages caused by enlistments and conscription. The harvests of 1917 produced just 12 million tons, down from 21 million tons before the war.

In addition, a disproportionate share of food was set aside for the German military. Civilians received 33 per cent of the grain, though they comprised 67 per cent of the population. They received pitifully low amounts of meat (12 per cent of pre-war levels) fish (five per cent) and eggs (13 per cent).

Farmers, able to grow their own produce, were coping – but conditions in German cities had become drastic. There were reports of malnourished factory workers collapsing at their machinery, of widespread outbreaks of dysentery and of gangs of skin-and-bones children begging on major streets.

Civilian deaths in 1918 increased by more than 200,000 from the previous year, mainly from starvation. Ten per cent of hospital patients, including many women in childbirth, were reported to have died from malnutrition.

The brink of collapse

By September 1918, the situation had become drastic and Germany was on the brink of collapse. The arrival of American and British Commonwealth troops on the Western Front had forced German forces there to retreat. The Spring Offensive had failed utterly and an invasion of Germany itself now seemed imminent, if the war continued.

Hindenburg and Erich Ludendorff, who had effectively governed as military dictators since 1916, concluded the war could not be won. Ludendorff sank into a severe depression and was later sacked by the Kaiser.

On September 29th, the German High Command, encouraged by US President Woodrow Wilson’s conciliatory 14-point peace plan, sought an armistice from the Allies. This was subsequently refused.

News that Berlin was seeking an armistice reached the military, sparking dissent, disorder and rebellion. Commanded to engage the Allied fleet in one last battle, German sailors at Kiel instead mutinied. They rejected their orders, occupied their base and drafted a list of demands including an end to the war and the introduction civilian government.

The Kiel mutiny marked the death knell for the German imperial government. It now seemed that the Kaiser and his generals were unable to control the military.

In addition, councils of workers and mutinous soldiers and sailors were forming across Germany. These groups seized control of several cities and regions across Germany, including Bavaria, Hanover, Brunswick and Frankfurt. The German Revolution, as it became known, had begun.

A historian’s view:
“The army, it could be argued, had fought a heroic battle and would therefore maintain its prestige in the eyes of the nation, after the war. The fleet, on the other hand, had spent most of the war bottled up in Wilhelmshaven and Kiel. It was expected that the country would never wish to rebuild a navy that had proved so useless. A spectacular battle in the North Sea was supposed to rectify this. When ordering that thousands of sailors be sent to their deaths in a final do-or-die battle, the Admiralty had its own future in mind. But the sailors wanted to go home rather than die as heroes in the North Sea… The ‘revolution from below’ had broken out.”
Volker Berghahn

1. In late 1917, Germany’s military leaders and some civilian politicians still held hopes of achieving victory on the Western Front.

2. A Spring Offensive in 1918 was initially successful but eventually stalled due to heavy losses and inadequate personnel and supplies.

4. Germany in late 1918 was on the brink of collapse and invasion. Its leaders began seeking an armistice, triggering civilian and political unrest.

5. The Kiel mutiny of October 1918 expanded into nationwide unrest that became the German Revolution. This brought about the abdication of Kaiser Wilhelm II and Germany’s surrender in November 1918.

Citation information
Title: “Germany in late 1918”
Authors: Jennifer Llewellyn, Steve Thompson
Publisher: Alpha History
URL: https://alphahistory.com/weimarrepublic/germany-in-late-1918/
Date published: September 7, 2019
Date accessed: Today’s date
Copyright: The content on this page may not be republished without our express permission. For more information on usage, please refer to our Terms of Use.