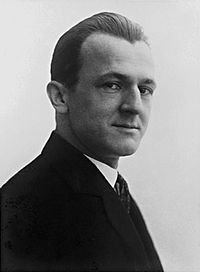 George Grosz (1893-1959) was an artist and illustrator, best known for his involvement in Dadaism, his painful depictions of life in the Weimar Republic and his anti-Nazi pieces.

Born in Berlin, Grosz was the son of a publican. He endured difficulties during childhood, including the death of his father, an impoverished upbringing and bullying and persecution at school.

Grosz was expelled from high school in 1908 and decided to focus on drawing, at which he had shown considerable talent. He enrolled for further studies at a Dresden art academy. He also engaged in self-study, reading widely and

In 1912, Grosz relocated to Berlin where he produced his own work focusing on the colour, movement and difficulties of urban life. On the outbreak of World War I, Grosz was conscripted into the German army but discharged shortly after on grounds of mental instability.

Grosz’s impressions of the war and his experiences of the war left him cynical and embittered against Germany’s ruling elites. His politics moved steadily to the left and in 1919 he joined the German Communist Party (KPD). Grosz was rarely active in the party, however, and he later distanced himself from the KPD.

During the 1920s, Grosz created scores of paintings and illustrations, many of which touched on political and social themes. His work was known for its brutal caricatures of the German bourgeoisie, particularly its business leaders, politicians and militarists.

Topics covered in Grosz’s work during this period include political corruption, militarism, the inequalities of capitalism, the mistreatment of war veterans, urban life, Weimar decadence and eroticism. In 1928, Grosz was unsuccessfully prosecuted for blasphemy for drawing suggesting that churches had engaged in murder by supporting the war.

Grosz was vehemently opposed to the National Socialists (NSDAP) and one of the few Weimar artists to regularly criticise them in his work. He ridiculed Adolf Hitler‘s intense nationalism as early as 1932, in a work titled ‘Hitler the Savior’. These workers later led to death threats from Nazi supporters.

Grosz left Germany shortly after Hitler’s rise to power in 1933. He spent the rest of his life in the United States, where he taught art in New York and continued to draw and paint until his death.