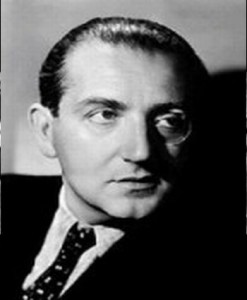 Fritz Lang (1890-1976) was probably the most significant figure in Weimar cinema. He is best known for his technical innovations and use of Expressionist styles and his ground-breaking 1927 science-fiction film Metropolis.

Born in the Austrian capital Vienna, Lang’s father was an interior designer, his mother a Jewish housewife. Their children were raised as Catholics, perhaps to avoid the latent anti-Semitism of the time.

After completing high school, Fritz Lang studied architecture and civil engineering but was distracted by the bohemian student life and a growing interest in the visual arts. In 1913, after a year’s travel in Africa and the Asia-Pacific, Lang relocated to Paris to study art.

The following year, Lang returned to his native Austria and was conscripted for war service. He was a reluctant but effective soldier who was commissioned, reaching the rank of lieutenant. Lang was also frequently injured, the last of his war wounds costing him the sight in one eye. In 1918, he was invalided out of the Austrian army and returned home to Vienna.

Lang’s dreams of becoming an artist shattered by his vision impairment. Instead, he took up acting and screenwriting. Frustrated by how others were interpreting his scripts, Lang took up directing. He also married Thea von Harbou, another writer with whom he had been collaborating.

As a director, Lang adapted and utilised expressionist techniques that drew on his knowledge of the visual arts. His films also engaged in social and political criticism and often explored dark topics like crime and murder.

Lang’s first significant film, Doctor Mabuse (1922) was a dark psychological story that intertwined crime, hypnosis and immorality. His direction was acclaimed for its use of light and shadow, particularly a car chase scene that was shot at night, a first in cinema.

Lang’s best-known work, Metropolis, was completed in 1927. Metropolis was a work of science fiction that depicted a dystopian future society. In his fictional city, workers toiled underground while wealthy elites lived lives of leisure in the sun.

Metropolis was ambitious in both style and scale, involving extravagant futuristic sets and thousands of extras. Production cost in excess of five million Reichsmarks, a fortune in the mid-1920s. Metropolis was a commercial failure but is now regarded as one of the most influential films of all time.

Another Fritz Lang film, M (1931), told the story of a child-murderer, a topic unexplored in cinema to that point. Lang researched by living briefly in a criminal asylum and employed several known criminals as extras.

The rise of Nazism curtailed Lang’s career. According to Lang, the National Socialists (NSDAP) attempted to recruit him to produce film propaganda, prompting him to flee Germany. He later relocated to Paris and the United States. His wife remained in Germany and aligned herself with the NSDAP.

Lang continued his film career in the US, directing movies such as the crime-thriller The Big Heat (1953). Though not as acclaimed or high profile as other Hollywood film-makers, some of his techniques were admired and replicated by other directors.

In 1959, Lang returned to Germany to direct a sequel to Doctor Mabuse. He went into retirement shortly after its release and died in California in August 1976.