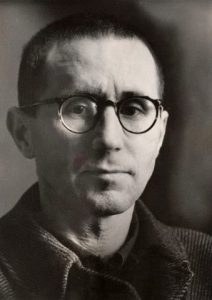 Bertolt Brecht (1898-1956) was a German writer, poet and playwright, known for his socialist values. He produced several significant works during the so-called ‘Golden Age of Weimar’.

Brecht was born into a middle-class family in Augsburg, southern Germany. He attended the local grammar school and was a talented but rebellious student, once risking expulsion by writing an anti-nationalist essay.

In 1917, Brecht began studying medicine in Munich and also becomes involved in student theatrics. He deferred his students the following year after being conscripted to work as an orderly in a local military hospital.

After the war, Brecht abandoned his medical studies and devoted himself to writing theatrical works. He also worked as a critic and in-house dramatist for theatres in Munich and Berlin.

One of Brecht’s first successful works was Trommeln in der Nacht (‘Drums in the Night’), a 1922 play set during the Spartacist uprising. Its plot, sympathetic to the Spartacist movement, tells of a German soldier returning home from the front to discover that capitalists and war-profiteers have stolen everything.

As the 1920s progressed, Brecht studied Marxism and became an ardent socialist. Though he never joined or was active in communist movements, most identified his plays and writings as Marxist. The National Socialists (NSDAP) certainly did, placing him near the top of their cultural blacklist.

Brecht’s The Threepenny Opera, written in collaboration with Kurt Weill, opened in 1928. It was, in essence, a socialist condemnation of life under capitalism. It became the most popular and successful theatrical work of the Weimar period and one of the best-known works of the 1920s.

Brecht left Germany after Adolf Hitler‘s ascension to power in 1933. He spent several years in Denmark before having to flee the Nazis again, this time to the United States. He continued to write prolifically for American theatre, even undertaking some work for Hollywood.

After World War II, Brecht returned to Europe. He lived in East Berlin until his death in August 1956.